"Legend of the Guardians" a Strange, But Entertaining Bird 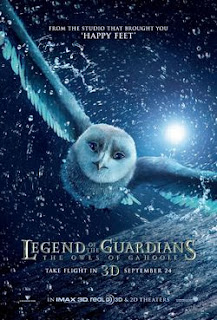 Legend of the Guardians: The Owls of Ga’Hoole (2010)
Running time: 90 minutes  (1 hour, 30 minuntes)
MPAA – PG for some sequences of scary action
DIRECTOR: Zack Snyder
WRITERS: John Orloff and Emil Stern (based on the Guardian of Ga’Hoole novels by Kathryn Lasky)
PRODUCER: Zareh Nalbandian

Legend of the Guardians is directed by Zack Snyder, master of the faux-historical 300 and the superhero faux pas, Watchmen. The computer animation is the work of Australian digital visual effects company, Animal Logic, which also produced the Oscar-winning Happy Feet. Unlike Happy Feet, Legend of the Guardians may be too dark, too violent, and too intense for children younger than 8 or 9 years-old.

An easy way to describe this film is as Lord of the Rings with owls. Like LotR, Legend of the Guardians is visually astounding, especially when its characters (mostly all owls) take to the air for breathtaking displays of avian aerial prowess. The story features all the familiar characteristics of the hero’s quest, and the character drama is sometimes as dull as the flying and fighting are attention-grabbing. But this is done with owls, and that’s the hook that makes this movie work.

The film focuses on Soren (Jim Sturgess), a young owl enthralled by the epic stories his father, Noctus (Hugo Weaving) tells him. These are heroic and historical legends of the Guardians of Ga'Hoole, a mythic band of owl warriors that fought a great battle to save the Kingdom of Ga’Hoole from the Pure Ones, a group of evil owls.

Soren dreams of someday joining his heroes at their home, the Great Ga’Hoole Tree, but his older brother, Kludd (Ryan Kwanten), scoffs at the notion. Kludd is jealous of the attention his father gives Soren. Kludd’s jealousy leads to the brothers being kidnapped by minions of the Pure Ones and taken to their leaders Metalbeak (Joel Edgerton) and his mate, Nyra (Helen Mirren). When Soren learns of the true evil the Pure Ones are planning, his only hope is to find the Guardians of Ga’Hoole, but are these owls real? He and an elf owl named Gylfie (Emily Barclay) escape the Pure Ones and embark on a journey to find the truth and to perhaps save the owl kingdoms.

Legend of the Guardians is relentlessly dark in terms of the story, but is relentlessly splendid in terms of 3D animation. Ga’Hoole’s story treats war as something that is occasionally needed to stop evil and aggression. Here, war is an extraordinary event meant for warriors, and not for warrior-wannabes. It is just this attitude that gives the film’s battles so much weight and importance.

Legend of the Guardians is also a 3D movie, but the computer animation – in terms of stimulating character action, movement, blocking, and camera movement – make seeing it in plain old 2D quite a bracing experience. I saw it in 2D, and that did not keep me from marveling at the texture of owl feathers and the surface consistency of the costumes and implements the birds wore. Unreal feathers have never looked so real. Even the skin of the snake character, the nest maid, Miss Plithiver (Miriam Margolyes), looks like real snake skin. The drawing and design style tends towards realism, especially in the landscapes and backgrounds, but the colors keep the animation from going too far by giving everything a sense of magic and fantasy.

Geoffrey Rush as the wise old warrior owl, Ezylryb, and Helen Mirren (as Nyra), give excellent voice performances. Rush is great at making supporting characters zany and attractive, and Mirren would be award worthy even taking orders at McDonald’s. Jim Sturgess is also good as Soren, but no one else really does anything that stands out.

Where the film falters is character drama. When Legend of the Guardians shows its characters in flight or in a fight, the movie is fierce, passionate, and awesome. When it slows down for some drama, the movie feels grounded, even a bit a silly. Legend of the Guardians: The Owls of Ga’Hoole is a strange bird indeed. It is an excellent action fantasy movie, but like some of children’s fantasy films, it lacks heart. Its sentiment and messages feel phony and thrown in out of a sense of obligation. Where does that leave the viewer? Enjoy the action and patiently tolerate everything else.

[Also, before Legend of the Guardians: The Owls of Ga’Hoole begins, audiences in movie theatres get a new Wile E. Coyote and Road Runner cartoon short called “Fur of Flying.” However, unlike most Road Runner cartoons, which are 2D or hand-drawn animation, “Fur of Flying” is 3D or computer-animated. 3D animation is a weird way to see Wile E. Coyote and Road Runner, but this short isn’t bad at all.]