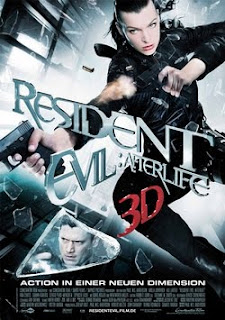 Watching the opening act of Resident Evil: Afterlife, I found so many of the action scenes derivative of The Matrix trilogy and even the 2006 film, Ultraviolet, which features the star of the Resident Evil films, Milla Jovovich. But that’s okay; Inception “borrowed” from The Matrix and that did not affect the film’s box office or critical reception. [Afterlife was also released in 3D, but I saw it in traditional D.]

Anyway, Afterlife is the fourth movie in the film series based upon the Resident Evil videogame franchise. In Resident Evil, a pathogen called the “T-virus” escaped into the outside world and led to an apocalypse which turned most of humanity into Undead hordes. As Afterlife begins, Resident Evil heroine, Alice (Milla Jovovich) launches an assault against an Umbrella Corporation stronghold in Tokyo in an attempt to kill primary Resident Evil nemesis, Albert Wesker (Shawn Roberts).

Then, Alice begins the search for the friends she made in the previous film, Resident Evil: Extinction, but she only finds Claire Redfield (Ali Larter). The promise of the safe haven known as Arcadia takes Alice and Claire to Los Angeles, where they find a small band of survivors, including a suspicious soldier (Wentworth Miller) and Luther West (Boris Kodjoe), a celebrity and former professional basketball player. The city, however, is overrun by thousands of Undead, and Alice wonders if she has flown into a trap.

As much as the Resident Evil films deal with cannibalism in the form of zombies eating humans, the franchise also cannibalizes other horror, science fiction, and science fiction/horror films. So much of Afterlife, like its predecessors, seems so familiar, that I often spend my time recognizing scenes in this film as being like scenes from other movies.

That’s OK. It doesn’t matter how derivative Afterlife is as long as viewers can enjoy it, and I enjoyed this one more than I enjoyed the other sequels. In fact, I found Afterlife to be the best since the first film in 2002.

Practically everything that writer/director Paul W.S. Anderson does in Afterlife, whether they are his own ideas or borrowed, look good. This is a movie full of well-staged action scenes, and Anderson buries his audience in enough tension and the anticipation of impending doom that they won’t be able to spend much time nitpicking. Plus, that pumping score and soundtrack from the delectable tomandandy make even Afterlife’s mundane moments seem like the height of drama.

One thing that is different in Afterlife is that Anderson’s script is laser-focused on the motivations of each and every character – from the main player, Alice, to a minor character named Wendell (Fulvio Cecere), who tries to turn Alice taking a shower into his own private peep show. Character motivation makes the action, drama, and plots matter, and when those matter, the audience is interested in what comes next.

Resident Evil: Afterlife offers plenty of cool fight scenes, horror movie gore, wicked monsters, etc., but this is also a horror survival movie that will make you care about the poor humans as much as you do the creatures and special effects. Cool, Resident Evil post-apocalypse finally meets character drama.