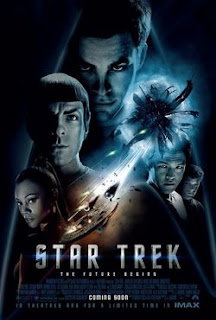 SCI-FI/ACTION/THRILLER with elements of drama and comedy

The new film, Star Trek, may be the 11th film in the movie franchise launched from the much-beloved 1960s television series, but it’s not just some sequel. Under the guiding hand of director J.J. Abrams and writers, Roberto Orci & Alex Kurtzman, this stunningly clever and wildly imaginative reboot is a fresh take on a venerable science fiction classic.

This sexy and new Star Trek is not a replacement for anything that has come before it. This is more than a facelift, tummy tuck, breast enhancement, etc. meant to make an old lady (or man) look as shiny and as new as all the other new fangled sci-fi franchises with whom Star Trek now shares the pop cultural landscape. This Star Trek is something new made from familiar ingredients, and it’s a damn good movie to boot!

Star Trek 2009 takes the audience back to the early days when future Captain James T. Kirk was a hot-rodding, delinquent. Actor Chris Pine plays Kirk with all of a young actor’s bravado, presenting Kirk as a tow-headed, rebel without a cause, but smarter than his actions indicate. Although the pre-captain Kirk acts like a loser, Pine’s performance makes sure that the audience marks Kirk as exceptional, even among the big brains at Starfleet Academy.

There’s no fun in having a cocksure Kirk without a Spock. In the hands of actor Zachary Quinto, Spock – all shiny bangs and elfin ears – is the control freak as proper gentleman, but beware the volcanic temper and impulsive streak that bubbles underneath. Not only is Spock smarter than everyone else (and lets them know it), he ain’t afraid to get his swerve on with the ladies!

Refusing to merely slink in the background as eye candy is this enchanting new Uhura, whom the gorgeous Zoë Saldana plays as super smart, super sexy, and super don’t-put-up-with-bullshit. This lovely lady ain’t too grand to show her soft and caring side with the man in her life, but she’ll go toe-to-toe with impulsive Starfleet officers. In this era of Oprah Winfrey, Condoleeza Rice, Beyoncé Knowles, and Michelle Obama, it’s great to see such a strong, complicated woman of color like Saldana’s Uhura in pop culture, especially science fiction.

Star Trek’s plot revolves around a time-traveling, revenge-seeking, shaven-headed Romulan named Nero. Played with a kind of wrathful quietude by the exquisite Eric Bana, Nero is a Star Trek villain worthy of Khan and the Borg Queen. Piloting a giant, squid-octopus-like, planetoid drill, Nero is the Everyman turned murderous thug, and every time Nero unleashes his killing machine, this movie exudes the kind of special effects grandeur previous Star Treks never had. On the maiden voyage of the U.S.S. Enterprise (all shiny and Macintosh-ed), this new, but elite crew must rescue its Captain Christopher Pike (Bruce Greenwood) from Nero’s clutches and stop the Romulan from destroying Earth. Oh, and the original Spock (Leonard Nimoy) plays an integral part in the story.

Everything about this new Star Trek is bright, sparkly, and cutting edge; it’s as if the film is constantly generating new visual effects every few seconds just to dazzle your eyes and blow your mind. The battle scenes remind me of the ones on the Sci-Fi Channel’s recent Battlestar Galactica series (itself a re-imagination of an old sci-fi franchise). Sometimes, this film even feels a little like a Star Wars movie (of which J.J. Abrams is fan). Even Simon Pegg’s hyperkinetic take on chief engineer Scotty is a joy to behold. Yes, this new Star Trek delivers the good. It’s not like most popcorn movies – practically gone from your mind within a few hours of leaving the theatre. Watching this Star Trek left me with good feelings, and it made me believe that Star Trek is once again ready to keep going boldly into the future.