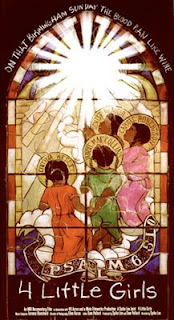 4 Little Girls is Spike Lee’s 1997 documentary film about the 1963 16th Street Baptist Church bombing. Located in Birmingham, Alabama, this African-American church was a hub of the city’s Civil Rights movement in the 1950s and 60s.

On the Sunday morning of September 15, 1963, four members of a Ku Klux Klan group planted a box of dynamite with a time delay under the steps of the church near the basement. Killed in the ensuing explosion were 14-year-old Addie Mae Collins, 11-year-old Denise McNair, 14-year-old Carole Robertson, and 14-year-old Cynthia Wesley – the titular 4 little girls of the film.

4 Little Girls recounts the days leading to the bombing, the state of the Civil Rights movement in Birmingham at the time, and the aftermath, specifically the girls’ funerals. Lee interviewed the people who knew the girls, including surviving parents, siblings, neighbors, relatives, and friends, among others. For the film, Lee also interviewed a number of Civil Rights luminaries, social activists, and other famous figures, including Andrew Young, Bill Cosby, Ossie Davis, and Coretta Scott King. The film is filled with archival footage, most of it coming from televised news, which presents other key participants, including Dr. Martin Luther King and the bombing plot’s ringleader, Robert “Dynamite Bob” Chambliss.

The film begins with Joan Baez singing “Birmingham Sunday” a song that chronicled the events and aftermath of the bombing. The song, written by Richard and Mimi Farina (Joan Baez’s sister), is a haunting theme throughout 4 Little Girls.

In the first hour of the film, Spike Lee does a superb job in presenting the state of affairs in Birmingham and connecting it to the overall Civil Rights movement. Lee deftly builds to the bombing like a slow train gradually building speed to the terrible event. He does this by getting the girls’ families and friends to remember details (including one woman’s prophetic dream) that are startling in their intimacy.

The scenes that recount the actual bombing are as riveting as anything found in the best movie thrillers. Using interviews and archival footage, Lee presents the shock, grief, and anger in a way that still resonates and even seems to jump off the screen and into your gut. It may be too much for some. The recollections of the girls’ family and friends and also the funeral are tear generators, although the post-mortem photos of the girls may be a bit much for some (cause they were for me).

After the scenes depicting the funerals, Lee’s film falters. The movie’s focus on the grief is morbid and obsessive. Of course, there is nothing wrong with depictions of grieving family. However, the bombing, which was clearly a racially motivated terrorist attack, was meant to halt the integration that was already occurring in Birmingham (due to negotiations between African-American leaders and moderate whites). Lee’s film only mentions that in passing. Lee also fails to present the ways in which the 16th Street Baptist Church bombing affected the move for equality in America. The deaths of those four girls gave energy to a Civil Rights movement that, at the time, apparently needed reinvigoration.

I don’t fault the film for taking such a deeply personal look at how the girls’ deaths affected those around them. Their deaths had a larger meaning; they were essentially a sacrifice, one that directly led to improving the lives of all oppressed people, not just African-Americans, in the United States. 4 Little Girls is an excellent film and a wonderful document of the lives of four innocents. It is one of Lee’s best and most powerful works, but he missed something back when he made this film – the larger context of how the bombing changed us and our country.

Seeing the sacrifice as at least equal to the focus on the victims may be a cold equation, but it was and is a reality in the fight for equality.