Diary of a Wimpy Kid Movie is Surprisingly Strong 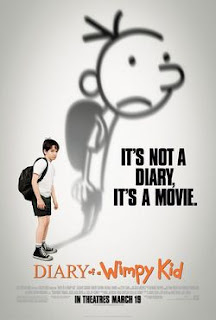 Diary of a Wimpy Kid is a film based on the first book in a bestselling, illustrated children’s book series of the same name by Jeff Kinney. The film follows the trials and tribulations of a wise-cracking, pre-teen as he lives through his first year in middle school.

Even as he enters, Greg Heffley (Zachary Gordon) thinks middle school is the dumbest idea ever invented, but he is confident that he will easily become the school’s most popular kid. Greg is worried that his chubby friend, Rowley Jefferson (Robert Capron), will not fit in, so he goes about trying to rid Rowley of anything that makes him look like a little kid, and therefore makes Greg look bad by association. Each of Greg’s attempts at becoming a “class favorite” fails or backfires, but when Greg lets Rowley take the blame for one of his own mistakes, Greg may not only lose his best friend, but he may also become the least popular kid in school. Luckily, Greg is getting it all down on paper in his diary, filling it with thoughts, opinions, stories and cartoon doodles – the Diary of a Wimpy Kid.

Diary of a Wimpy Kid is a lively movie – mixing social and family comedy (albeit from a kid’s perspective) with animated segments designed to mimic the stick figure art of the original books. Children will adore this bright and funny movie, but adults will also delight in this surprisingly momentous story, with its keen observations on human nature. Life lessons and redemption abound, but the movie never seems preachy.

The main reason this movie works is the performances, especially the young cast, and Zachary Gordon as Greg Heffley is by far the best. Gordon gives a performance that is surprisingly professional. Gordon doesn’t pretend to be a character like so many child actors, but actually becomes Greg Heffley, making the character seem like a real kid. Working within the parameters of the nimble filmmaking of director Thor Freudenthal, Gordon drives this movie, making Diary of Wimpy Kid not at all wimpy.