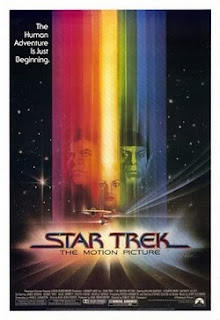 SCI-FI/ADVENTURE with elements of drama

The original cast of the 1960’s sci-fi television series, “Star Trek,” reunites aboard the U.S.S. Enterprise with Capt. James T. Kirk (William Shatner), now admiral, back in the big chair. Their mission is to intercept a giant alien ship steadily approaching Earth and destroying everything in its path. Kirk must also square off with the man who was the Enterprise’s new captain, Commander Decker (Stephen Collins), until Kirk displaced Decker and made him his assistant.

In 1979, Star Trek: The Motion Picture blasted onto movie screens, much to the delight of Trekkies/Trekkers (Star Trek fanatics) and TV viewers who made the original series, which ran on broadcast TV from 1966-69, a smash hit in syndication during the 1970s.

While not the best of the Star Trek films featuring the cast of the original series, it’s joyous simply because the film marked the return of the original cast. The film has many good moments, some of them awe-inspiring and others deeply emotional (such as the scene in which Kirk sees the Enterprise in dock for the first time in over two years). While at times, it comes across as a Star Trek riff on 2001: A Space Odyssey, Star Trek: The Motion Picture hits all the right notes for those of us who are not fanatics, but who have a soft spot for the original Star Trek – warts and all.

Posted by Leroy Douresseaux at 8:23 AM