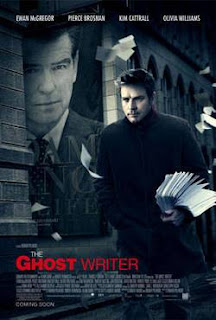 In the film Green Zone, director Paul Greengrass (The Bourne Ultimatum) and Oscar-winning screenwriter Brian Helgeland presented their critique of the run-up to the Iraq War within the framework of a military action thriller starring Matt Damon.

Oscar-winning director Roman Polanski (The Pianist) and co-writer Robert Harris also have something to say about Iraq. They present their criticism of former British Prime Minister Tony Blair’s cooperation with the U.S. invasion of Iraq as a murder mystery and political thriller entitled The Ghost Writer, based upon Harris’ novel, The Ghost.

In the film, Ewan McGregor plays a successful British ghostwriter, a professional writer who is paid to write books, articles, reports, etc. that are credited to another person. He is hired by a giant American publishing house to ghostwrite the memoirs of former British Prime Minister Adam Lang (Pierce Brosnan). McGregor’s character is unnamed in the story, but he refers to himself and is known to others as “The Ghost” or “Lang’s Ghost.”

The Ghost’s agent sees this job as the opportunity of a lifetime, but this project seems doomed from the start. The Ghost’s predecessor on the project, Mike McAra, a long time aide to Lang, drowned in an apparent suicide. The Ghost arrives at Martha’s Vineyard (near Cape Cod, Massachusetts), where Lang is staying in an oceanfront house. It is the middle of winter, and The Ghost finds Lang under siege. He has been recently accused of possible war crimes by a former British foreign secretary, Richard Rycart (Robert Pugh), and now faces the threat of prosecution by the International Criminal Court.

As The Ghost works with Lang and researches the project, he discovers that Lang is surrounded by untrustworthy people, and the circle of shifty characters seems ever-widening. Lang’s political controversies bring a swarm of reporters and protestors, eventually forcing The Ghost to move into Lang’s home. There, he uncovers clues suggesting that McAra may have stumbled onto a dark secret about Lang, and The Ghost wonders if he will ultimately share McAra’s fate.

Polanski can certainly write and direct a thriller. This film is tense, and stylish, but not in a showy way. The Ghost Writer is almost always mesmerizing and often riveting. Polanski teases his audience with just enough tidbits about the characters and their pasts to keep their brains on overdrive trying to decipher the players and their actions. Sometimes, this movie is too coy about the characters and their motivations, but the atmosphere of paranoia and deceit will make you overlook any faults. The film’s smooth pace belies its ability to keep the viewer on the edge, never settled, and too busy to nitpick.

Ewan McGregor executes the perfect turn as the laconic Ghost, who views everything with a critical eye, but is also always on the lookout for clues. Olivia Williams is both vicious and vulnerable as Lang’s erratic wife, Ruth Lang, and the underrated Kim Cattrall gives a clever performance as the red herring chanteuse, Amelia Bly, Lang’s personal assistant.

Your politics or your opinions of the director may affect how you feel about this movie, but this confident thriller is perfect for those who love political intrigue. The Ghost Writer makes other recent political thriller/murder mysteries (like Edge of Darkness with Mel Gibson) look positively anemic. I won’t say that The Ghost Writer is as good as Polanski’s classic Chinatown, but this is good stuff.

Posted by Leroy Douresseaux at 7:40 PM