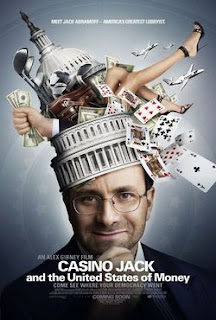 For almost 20 years, Jack Abramoff was an American lobbyist. He was also a businessman, film producer, and political figure. His ascendancy as an influential and powerful man, both as a lobbyist and within the Republican Party, began when the Republicans seized control of both houses of Congress in 1994. Over the next 12 years, Abramoff lobbied Congress for Indian casinos, sweatshop owners in Saipan, and even shadowy Russian interests. He eventually went to prison for defrauding his Native American clients and corruption of public officials.

Written and directed by Alex Gibney, Casino Jack and the United States of Money is a documentary film about Jack Abramoff, his career, his lobbying activities, and the people around him – including Congressmen, congressional staffers, fellow lobbyists, and assorted figures within conservative and right-wing Christian politics. Gibney won an Oscar for his 2007 documentary, Taxi to the Dark Side, but Gibney deftly plumbed the depths of economic and political scandal in the Oscar-nominated documentary, Enron: The Smartest Guys in the Room.

However, Casino Jack and the United States of Money is not just about Abramoff. It is really about the buying and selling of the American government with lobbyists as the go-betweens for the buyers (powerful business interests) and the sellers (Congress). Gibney dazzles with stories of Indian tribal councils spending millions of dollars to keep their casinos and to keep other tribes from having casinos. There is the sex slave industry in Saipan and a murdered Greek casino tycoon. Cold War intrigue mixes with African revolutionaries. Congressmen take lavish, overseas golf trips – transportation by private, corporate jet. But the real story is about the looting of the American government, our broken system of government, and the perilous state of our democracy.

Jack Abramoff was in prison while Gibney was making Casino Jack and the United States of Money, and although he was able to interview Abramoff in prison, Gibney was unable to film the former lobbyist for inclusion in the film. Not having Abramoff is a glaring omission, but this film is really about Casino Jack Abramoff AND the United States of Money. For all that the film covers Abramoff, his career, activities, associates, and business partners, the underlying theme of this documentary is the legalized bribery and influence peddling that has basically turned the American government over to people who can afford to buy it.

Gibney’s gift is to take subjects like accounting, finance, government, and law and make them interesting. Like the Enron movie, this Jack Abramoff movie is about corruption, and Gibney fills the film with interviews of the people involved and the people who are reporting on the takeover. What could be a boring piece of journalism is instead a compelling narrative that will wake up the viewer to corruption about which he should and must care. Gibney convinces the viewer that the corruption matters to him because it affects him and perhaps it will make that viewer become engaged and maybe even outraged.

Gibney can even find the humor in the con game. His interview with former Republican House Majority Leader, Tom Delay, reveals a man in denial about his activities with Abramoff. It is funny to watch Delay deliver half-truths and spin with smooth-as-silk dishonesty, as if he did not unethical, let alone wrong. I don’t know if Casino Jack and the United States of Money will make people take to the streets and demand change (probably not), but it is an important documentary in the modern history of American politics. It exists as a warning, a signpost on the road to American ruin. Ignore it at your peril.