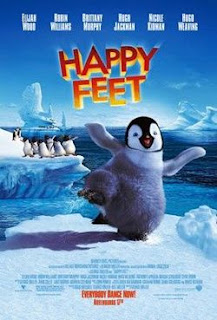 Happy Feet is the new computer animation feature film from George Miller, the director of two hit movie franchises, Mad Max and Babe. Filled with breathtaking action sequences, impressive tap dancing, and rousing musical numbers, it may be the first computer animated flick that tries to be everything to everyone. Happy Feet’s story is also a bit darker than its “PG” rating would suggest.

Deep in Antarctica, in the land of the Emperor Penguins, a baby penguin named Mumble (E.G. Daily) is born dancing to his own tune – tap dancing. That’s not good; for emperor penguins discover their mates with their Heartsong, which is how Mumble’s parents, his mom Norma Jean (Nicole Kidman) and his dad Memphis (Hugh Jackman, doing a strange Elvis Presley impersonation) met. Mumble can’t sing, and without a Heartsong, he may never find true love.

Later, when he grows up, the adult Mumble (Elijah Wood) still can’t sing, but he’s satisfied with his dancing. Mumble even has one close friend, Gloria (Brittany Murphy), who is the best singer in the land. Although she struggles with what the penguins consider Mumble’s “hippity-hoppity” ways, she has strong feelings for him. Still, that doesn’t keep Noah the Elder (Hugo Weaving), the stern leader of Emperor Land, from banishing Mumble.

Far away from home, Mumble finds himself in the land of the Adelie Penguins, who aren’t nearly as tall as the emperor penguins. Mumble is immediately befriended by the Adelie Posse. Led by gabby Ramon (Robin Williams), the Adelie Posse absorbs Mumble into their group because they’re impressed by Mumble’s tap dancing. With his new friends, Mumble sets out on the epic adventure of lifetime to discover why penguins’ chief food source (fish) is disappearing.

First, the computer animation in Happy Feet is some of the best seen yet, easily rivaling computer animation gold standard, Pixar (Finding Nemo, Cars). The film does have some live action sequences with human actors. The sequences of penguins sliding over ice fields or dodging avalanches, predators (killer whales and seals), and human machinery, are heart stopping, eye-popping, and just simply striking This has to be seen to be believed, because I can’t accurately convey the wonder of what’s on screen.

The story, however, is a jumble of genres, themes, and sub-plots. Happy Feet is an ecological tale about over fishing the penguins feeding grounds. It’s a tale of religious intolerance, dogma, and superstition. Mumble being made an outcast hits on themes of bigotry, discrimination, and narrow-mindedness. The relationship between Mumble and his father Memphis even brings up issues of parental acceptance.

Still, Happy Feet is a fun movie. Between the dizzying action scenes, rousing musical numbers, and the dancing, it’s hard to leave the theatre unhappy. It’s hard to not like that much singing and dancing, especially when the film mixes hit pop songs with modern hip-hop and tap dancing. George Miller used motion capture to record the moves of live dancers, and the penguins were animated over that. Famed American tap dancer Savion Glover provided Mumble’s remarkable and stirring moves.

The voice acting is also notable, especially Elijah Wood as Mumble and Robin Williams doing three roles (Ramon, Lovelace the Guru, and Cletus). While the entire cast is good at bringing the characters to life, Wood simply finds away of standing out as the protagonist, which isn’t necessarily easy; sometimes the voice actor playing the lead character seems lost in the cacophony of the supporting cast (like Brad Pitt in DreamWork’s Sinbad animated flick). Williams’ manic persona is now best suited for voice over work (as it seems tired in live action movies), and his three characters give Happy Feet energy and color.

Happy Feet is fun for the whole family, in spite of its unevenness and how it leaves out crucial details at key moments in the film. The singing, the dancing, and the epic adventure make Happy Feet a happy surprise.

Posted by Leroy Douresseaux at 12:55 PM