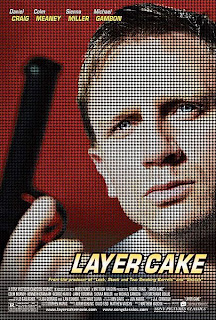 An unnamed British drug dealer (Daniel Craig) is looking to get out of the drug business, and he’s looking for one last big score to take him into retirement. Well dressed and polite, he is the consummate professional who has made a fortune trading in cocaine and ecstasy, while keeping his own hands clean, but the neat distance is about to come to an end.

Jimmy Price (Kenneth Cranham), the drug kingpin to whom he answers, has two last jobs for him – tie up the loose ends involving a stash of stolen ecstasy pills and also find the missing daughter of Eddie Temple (Michael Gambon), an old associate of Jimmy’s. However, Jimmy isn’t being entirely straight with our unnamed protagonist. The original owners of the gargantuan ecstasy cargo, ex-Serb paramilitary, are coming after Jimmy because he’s an associate of, Duke (Jamie Forman), the thief that stole the pills. Now, our suave drug dealer must rely on two associates, Morty (George Harris) and Gene (Colm Meaney), to help him out, but even they might not be able to help him when the Serbian hit man, Dragan (Dragan Micanovic), comes looking for him.

Matthew Vaughn’s Layer Cake is one of the more stylish British gangster films of the past decade. What sets it apart is Daniel Craig’s neat professional as drug dealer, which basically makes someone many consider a parasite, quite attractive. Vaughn (who received a 2005 BAFTA Award nomination for the "Carl Foreman Award for the Most Promising Newcomer") weaves a brilliant tapestry from J.J. Connolly’s screenplay, balancing intricate plotlines and a multitude of conflicting characters and motivations, at least until the end. Some viewers will need a scorecard to keep up with all the players and multiple loose ends that Vaughn ties up before delivering an ending that’s just got to go.

Other than that, Layer Cake is a brilliant crime film that blends style with gangster violence. On top of what seems like a simple story about a hood trying to exit the life of being a hood is a story about the cutthroat world of making money, where everybody is out to get his own. Those who demand the most – whether it is loyalty, respect, or money – are actually the least loyal, disdainful of others, and the greediest. It’s also nice that Vaughn smartly reminds the viewer that even the well to do can be scumbags.