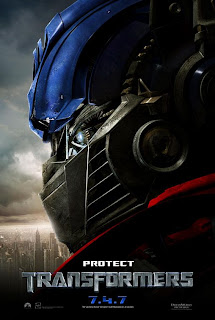 SCI-FI/ACTION with elements of drama, thriller, and war

Sam Witwicky (Shia LaBeouf) is the clever, jokester trying to navigate his way through the pitfalls of high school and the teenage years. As something of a smart mouth, he may think he’s special, but he doesn’t know the half of it.

For centuries two races of robotic aliens – the Autobots and the Decepticons – have waged a war to find the location of the lost Allspark, the energy that both powers them and creates more of their kind. Now, they’ve come to Earth, and the planet may be their final battleground. U.S. Air Force Technical Sergeant Epps (Tyrese Gibson) and U.S. Army Captain Lennox (Josh Duhamel) lead the military charge against the Decepticons. Meanwhile, Sam and his girlfriend Mikaela Banes (Megan Fox) are caught in a tug of war between the human-friendly Autobots and murderous Decepticons, and the clue to the whereabouts of Allspark is in Sam’s unsuspecting hands.

The first 100 minutes of Transformers is a great sci-fi war movie that is as gripping and as fun as Independence Day, which is a testament to Michael Bay’s skill as a director of awe-inspiring visuals. The last 40 minutes is mostly inane, with every few moments of action being a cinematic seizure crammed next to another spasm of CGI pomposity. In fact, in Transformers’ last act, even the supernaturally endearing Shia LaBeouf, who lights up both movies and TV with his half-shy, half smarter-than-you-are screen persona, is utterly lost.

The first half of the film is about the heroes versus impossibly advanced alien invaders, but the good guys won’t give up. After that, the Autobots and Decepticons take over, and the movie turns preposterous. CGI makes the robots and Michael Bay loves CGI, special effects, and all the technical processes of making a movie more than he loves actors and story. Actors and story thrive in the beginning, but computers and technicians take over by the end. I enjoyed the human story – man with his back against the wall against a mysterious invader, and I liked it enough to overlook the special effects ejaculation that is the final third of Transformers.

Posted by Leroy Douresseaux at 11:28 AM