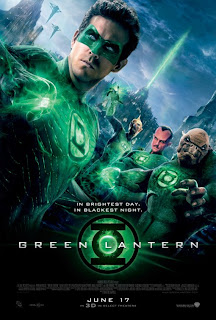 SUPERHERO/SCI-FI/ACTION with elements of drama

Green Lantern is a 2011 superhero movie, and it is the fourth movie this year featuring a character that originated or made extensive appearances in comic books. Green Lantern has enough entertaining science fiction action and superhero theatrics, but not enough to hide the fact that the characters are either lame and onscreen too much or cool and onscreen too little.

In 1959, the modern version of Green Lantern, a space age and science fantasy revamp of the character, first appeared in the comic book, Showcase #22 (cover dated September-October 1959), in a story from writer John Broome and artist Gil Kane. This modern or “Silver Age” version of character is the one that stars in the new film, Green Lantern.

Green Lantern the movie focuses on brash test pilot, Hal Jordan (Ryan Reynolds). Jordan’s bravado and recklessness has gotten him into trouble with his employer, Ferris Aircraft, and the company’s Vice-President, Carol Ferris (Blake Lively), who is also Hal’s girlfriend. However, his strong-willed nature brings him to the attention of the alien, Abin Sur (Temuera Morrison), who is a Green Lantern. The Green Lantern Corps is an intergalactic police force that uses the “green essence of willpower” to keep peace. Their power is focused through a green power ring.

Sur is mortally wounded in a battle with Parallax (Clancy Brown), the ultimate being of fear, whom Sur defeated and imprisoned long ago. Sur’s ring chooses Jordan as a worthy successor, but Sur’s fellow Green Lanterns do not find Jordan worthy. Jordan is the first human to become a Green Lantern, and Thaal Sinestro (Mark Strong), something of a leader among the Corps, quickly and brutally tests Jordan, leading the new Lantern to also doubt why the ring chose him. He will, however, have no choice but to be a Green Lantern. Parallax is coming to Earth to take revenge against Hal Jordan because he is Abin Sur’s successor and to destroy Earth because it is Jordan’s home.

Early in Green Lantern, the movie’s soundtrack (music and sound) is so loud that it is hard to understand what the characters are saying. At times, this movie is merely a sound and light show that occasionally dazzles, while generally assaulting your hearing. But I suspect this sort of thing will appeal to children, especially boys, who will like the noise and the special effects, which range from striking to embarrassingly second-rate.

Young viewers are the ones unlikely to notice the thinly written drama and how good actors play laughable, pathetic characters. Here, are some examples: Peter Sarsgaard as the comical bad guy Hector Hammond; Tim Robbins as Robert Hammond, an empty suit politician and Hector’s awful father; Blake Lively as Carol Ferris, who is the standard action movie hero arm-candy/cheerleader [Belief in yourself! Sniff Sniff. You can do it, my brave hero man]; and poor, always under-utilized Angela Bassett as the generic government flunky, Dr. Amanda Waller. Then, there is Mark Strong, who builds Sinestro into an intriguing character and worthy rival of Jordan’s Green Lantern, only to see the character reduced to speechmaking.

I like Ryan Reynolds, with his physique that looks like it was molded to be an action figure, but I don’t buy him as a test pilot or superhero. With his big teeth, seemingly sculpted by a dentist who really wanted to be an artist, Reynolds looks like he should be a junior executive in some corporate sales division.

With so much going against it, Green Lantern actually entertains with its big superhero set pieces and action sequences. On the other hand, the movie grinds to a halt whenever the actors pretend to be people instead of superheroes and strange beings. It’s this mixture of fun, goofy superhero action and tedious character drama that makes Green Lantern average at best. This movie needs to be a lavish sci-fi adventure (the goofy), but it doesn’t need the derivative character motivation and conflict [Daddy was mean to me! I can’t conquer my self-doubt and fear]. Green Lantern works in fits and starts. Sometimes, it impresses; sometimes, it is clunky and ineffective.

Posted by Leroy Douresseaux at 9:11 AM