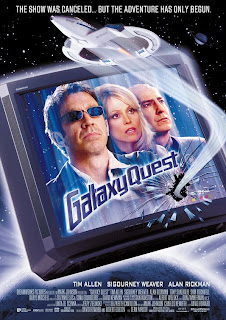 For a period of 4 years from the late 70’s to the early 80’s, on a sci-fi television series called “Galaxy Quest,” the starship, NSEA Protector, and its crew set off on thrilling and dangerous missions in outer space, until the show was cancelled. Twenty years after the series began, the five stars of the classic show: Jason Nesmith as Commander Peter Quincy Taggart (Tim Allen); Gwen DeMarco as Lt. Tawny Madison (Sigourney Weaver); Alexander Dane as Dr. Lazarus (Alan Rickman); Fred Kwan as Tech Sgt. Chen (Tony Shaloub); and Tommy Webber as Lt. Laredo (Daryl Mitchell) are still in costume, making appearances at various Galaxy Quest shows and sci-fi conventions, making speeches and signing autographs for their rabid and die-hard fans.

However, a new group of fans that are a bit too “far out,” appear at one of the conventions, but it turns out they really are aliens – the Thermians from the planet Thermia located in the Klatuu Nebula. The Thermians, who saw Galaxy Quest when the TV transmissions of the show traveled through space and reached their planet, believe that Galaxy Quest was a series of “historical documents,” of the real events. They shockingly believe that Galaxy Quest was about a real commander and his crew. They’ve built an exact replica of the Protector, but it is fully functional and operational. The Thermians whisk the crew off into space on an adventure to help them in their all-too-real war against the vile and deadly General Roth’h’ar Sarris (Robin Sachs). Now, the original crew plus Galaxy Quest TV show extra Guy Fleegman (Sam Rockwell) have to use their wits and their acting talents to save the Thermians and their own lives.

Galaxy Quest is simply an ode to the ultimate cult TV series, the original 1960’s “Star Trek.” This movie plays on the notion of the original Trek cast trying to escape the fame (or infamy) that came with being on the show, although the series’ enduring popularity made them famous and kept earning them money. Galaxy Quest’s hook is to ask the question, “What if the cast of such a show really had to be interstellar space adventurers taking on deadly galactic threats?” Ultimately, the film takes this novel idea and turns it into a superb, comic sci-fi film – one of the best sci-fi comedies ever to hit the screen. Anyone who has ever seen Star Trek will get the jokes and in-jokes because this film is so obviously a riff on everything that has to do with Star Trek, from the series itself to the Trek actors and the rabid Star Trek fan base, known as “Trekkies.”

I don’t know if someone who has never seen Star Trek will get this flick (“Galaxy Quest” was the title of an actual short lived Canadian TV series), but those who know Trek will love the gentle reminder of what made the series good and what makes it fun to be a fan. When Galaxy Quest seems to ask, “What if this were real?” we can feel that and can dream of how much fun it would be, and this winning and charming film captures that sense of fun.