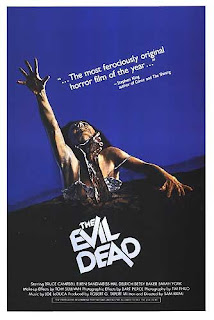 HORROR with elements of comedy

Ash (Bruce Campbell) and his four friends are college students on vacation, and their destination is a cabin (an actual abandoned cabin that director Sam Raimi reportedly later burned to the ground) remotely located in the Tennessee woods. What they don’t know is that those very same woods are full of slumbering demonic spirits that are ever-present and ever listening. They lie in wait for the recitation of an ancient incantation that will allow them to possess the living. The student quintet finds a reel-to-reel recording of that same incantation in the cabin’s cellar, and they unwittingly play the recording. One by one, Ash’s four friends succumb to these merciless spirits, leaving him alone in a struggle to save his body from possession and becoming one of the evil dead.

Long before they produced the “Hercules” and “Xena: Warrior Princess” TV shows, Sam Raimi wrote and directed and Robert Tapert produced one of the most shockingly original horror films of the last quarter of 20th century, The Evil Dead. If horror movies can be funny, then no truly scary movie was as funny as The Evil Dead. The film’s primary influences were obvious (writer H.P. Lovecraft and filmmaker George A. Romero), but Raimi’s script created a bastard child of Lovecraft and Romero that wouldn’t submit to being properly reared. It’s insane. It’s gory. It’s frickin’ hilarious.

Using the few resources he had, Raimi combined stop-motion photography, homemade gory effects, and cheap, but frightening monster makeup. Perhaps the element the best served The Evil Dead was the Raimi’s penchant for using an active camera. He mounted a camera on a 2x4, and he and actor Bruce Campbell would each hold an end and run headlong through the set. This created Raimi’s signature visual clue that evil moving running through the woods. The camera also tilts, spins, dips, swerves, flips over, and generally does whatever it takes to create the sense that demonic forces are constantly moving and creeping around – always in attack mode.

The performances are great, in particularly Bruce Campbell’s combination of half-madness and half over-acting. However, his cohorts (and the many stand-ins actors or “shemps” as they were called, who played the possessed students in the second half of the film) attack their roles as demonic zombies with relish – all in all creating some of the scariest film creeps in horror movie history. No one can be a true fan of horror films without having seen The Evil Dead, regardless if in the end he or she didn’t like it. The film is simply a viewing requirement for scary flick fans.