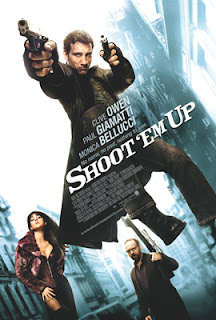 Writer/director Michael Davis’ film, Shoot ‘Em Up, may not be the last word in action movies, but dressed in a hail of bullets, Davis’ film certainly seems familiar with the best gunfights from the last three decades worth of American and Hong Kong action movies.

Mr. Smith (Clive Owen) is a mysterious man, but the one thing obvious about him is that he seems to be the angriest, most hardboiled man in the world. Now, this mysterious loner gets to play Mr. Hero when he delivers a woman’s baby during an intense shoot-out. Mr. Smith discovers that the infant boy, whom he dubs, “Oliver” (Lucas and Sidney Mende-Gibson), is the target of a ruthless killer named Hertz (Paul Giamatti) and his seemingly endless supply of gun-toting henchmen.

Smith teams up with an old acquaintance, a prostitute named Donna Quintano or “DQ” (Monica Bellucci), and the duo try to protect Oliver until Smith can discover why the baby is a target. Running through a storm of bullets and facing every conceivable (and some inconceivable) permutation of a gunfight, Smith takes the battle to Hertz in order to see who will be the last man standing.

Shoot ‘Em Up is gleefully sleazy and cheerfully offensive, and the cast knows it. Because the leads Clive Owen and Paul Giamatti play it strait with nary a wink or a nudge at the audience, we buy into this implausible, but highly entertaining nonsense. We’re all having fun, and this hyperactive bash isn’t witless, nor does it shoot itself in the foot. Owen and Giamatti are both fine actors and true movie stars; they simply know just how much to give and how to give it.

Davis has conceived a feast of gunfights that are both breathtaking and imaginative. Owen and Giamatti pull them off. Owen’s gun battle in the sky late in the film is so good that it lifts Shoot ‘Em Up’s pedigree. The final duel between Hertz and Smith is a showdown that is as much classic Western as it is Coen Bros. or Sam Raimi.

A movie that is largely just one extended, elaborate shoot out seems like, at best, a bad idea, and, at worse, a giant stink bomb. Shoot ‘Em Up, however, is a high concept built around something movies do well – create superb visual imagery and captivating visual moments and sequences. It may be low brow, but Shoot ‘Em Up is full of artful fun, cinematic thrills, and even a laugh or two (or three) at the expense of the gun lobby.