"30 Days of Night" Almost Gets it Right 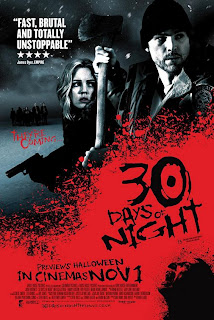 HORROR/THRILLER with elements of mystery

Barrow, Alaska is the northernmost town in the United States and is isolated, about 80 miles from the next nearest town. At one point during winter, the sun does not appear for 30 days and nights. This year, when the darkness falls, a stranger (Ben Foster) arrives in Barrow. Unknown to the residents of this isolated village, the stranger is the harbinger of a legendary evil hungry to feed on them. Barrow’s youthful sheriff, Eben Oleson (Josh Hartnett), and his estranged wife, Stella Oleson (Melissa George), lead a small band of survivors against the marauding killers and their terrifying leader, Marlow (Danny Huston). Their only hope is to hide and survive the 30 days of night.

Part of the selling of 30 Days of Night was to tell potential audiences that the film would be some kind of new vision of vampires, but the truth is that this movie is like an imaginative retelling of the 80’s vampire flick, Near Dark. Director David Slade (Hard Candy) creates a proficient, atmospheric horror film, recalling the claustrophobic dread of John Carpenter’s The Thing, and composer Brian Reitzell’s unnerving score also adds a deeply ominous mood over the movie. However, the storytelling ultimately takes a backseat to the clever premise, and the movie suffers for it.

Midway through, the film comes frayed at the ends. The cool idea – to set a vampire tale in a place where night last for 30 days – can’t save a movie where the narrative is a collection of scenes and plot points rather than an actual story. There’s not so much as a beginning, middle, and end as there is a series of vampire attacks. Also, the characters are merely fodder – meat for the beasts, and they’re played by a dreary, chilly cast, although Josh Hartnett and Melissa George stand out for reasons that will be obvious. Who are the people of Barrow? What do they like, and what are their goals? What makes them want to live in an extremely remote place like Barrow, where it’s actually dangerous to live? Those questions are never posed because the filmmakers are obsessed with the blood and guts of horror to the neglect of anything about good storytelling.

30 Days of Night will ultimately be remembered as a good idea that became a misfire in the hands of filmmakers so blinded by the surface shine that they wouldn’t dig deep. Yes, it does have its inspired moments and can entertain, but what could have been a special horror flick ends up being yet another flashy display of horror movie blood and excessive violence.