Review: 1993 Version of "The Three Musketeers" is Surprisingly Fun 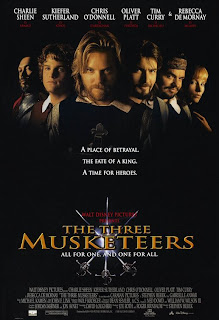 HISTORICAL/ACTION/COMEDY with elements of drama and adventure

The film opens on young d’Artagnan (Chris O’Donnell) who arrives in Paris with dreams of becoming one of the Musketeers, a band of men sworn to protect and serve the King of France, as his late father was. However, the king’s minister, Count Richelieu (Tim Curry), has just disbanded the Musketeers. This is part of Richelieu’s plot with the Duke of Buckingham of England to overthrow King Louis XIII of France (Hugh O’Conor). Richelieu wants to become the new king after the coup, and he also plans to take Queen Anne of Austria (Gabrielle Anwar) as his queen.

Through a series of misadventures, d’Artagnan joins the three best Musketeers: Athos (Kiefer Sutherland), Porthos (Oliver Platt), and Aramis (Charlie Sheen) to stop Richelieu’s evil plot. First, they must intercept Richelieu’s spy and secret agent, Milady de Winter (Rebecca De Mornay), from delivering a signed treaty to the Duke of Buckingham. However, it seems as if the entire country is set against d’Artagnan and the Three Musketeers as they try to save King and Country.

When this version of The Three Musketeers debuted back in November 1993, I was too much of a snob to see it. To me, it seemed like it was going to be nothing more than trash, but 18 years later, I enjoyed watching it. However, it turns out that I was right about some of my misgivings. Three of the four lead actors: Charlie Sheen, Kiefer Sutherland, Chris O’Donnell are just awful, with the lone exception of quality being Oliver Platt’s largely comic performance. Even Tim Curry is way more over the top than he needs to be, while Julie Delpy’s Constance is hardly in the film. Rebecca De Mornay actual makes the most of her scenes and turns in quite a nice performance as the femme fatale, Milady de Winter.

Early in the film, either because of the direction (by Stephen Herek) or the editing, the pace of the film is clumsy and awkward. Then, as the story goes on, the film settles into being a rousing adventure with a delightful comic mood. The film’s art direction and set decorations make this a surprisingly beautiful film, and the English and Austrian shooting locations offer viewers some lovely scenery. Plus, there is even a cool song for the soundtrack, “All for Love” sung by Bryan Adams, Sting, and Rod Stewart (written by Adams, film composer Michael Kamen, and Robert John “Mutt” Lange).

There isn’t much else to say. In most ways, this 1993 version of The Three Musketeers is just an average Hollywood flick, but I like it.