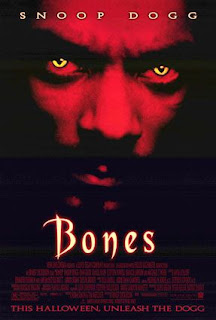 I held out no hope for rapper Snoop Dogg’s horror film vehicle, Bones. It was released in 2001, but I didn’t see it until two years later. When I finally saw it, I found Bones surprisingly entertaining, if a bit hokey and poorly written.

I also learned that Ernest Dickerson directed the film. Dickerson came to prominence in the late 80’s and 90’s as Spike Lee’s cinematographer on Lee’s first five full-length features including Do The Right Thing and Malcolm X. He made his directorial debut with the fairly well received urban drama Juice, about a group of friends and their trouble with a pistol. Dickerson later showed a deft touch for horror films with the delightful Demon Knight, a film version of the HBO series “Tales from the Crypt.” Sadly, Bones, although mildly entertaining, lacks Demon Knight’s sense of mad glee and hilariously evil hijinx.

Snoop plays Jimmy Bones, a low-key gangster, pimp type, and godfather of an inner city neighborhood in 1979. When he refuses an offer to join the drug trade, the dealers shoot him and force his associates and baby mama to participate in the killing. 22 years later, his angry spirit returns after some suburban kids buy his playa mansion and turn it into a club.

Bones isn’t that bad, but it isn’t too good. It’s lost somewhere in the middle of mediocrity. The characters all have potential, especially in regards to their socioeconomic and ethnic backgrounds, but the filmmakers sacrifice them to violence and trite special effects, many of the effects old when Clive Barker used that kind of SFX in his early Hellraiser films.

Snoop does most of acting with a perpetual scowl etched across his face. Still, he has excellent screen presence, and makes a good bad guy when he’s given (I don’t know, maybe) depth and subtext. It really would have been nice had Dickerson approached this film with the same sense of fun and funny mayhem that made Demon Knight such a charmingly trashy fright flick.