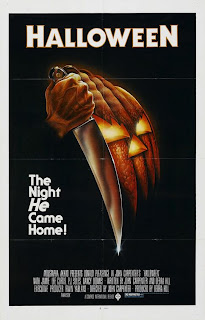 On Halloween night 1963 in Haddonfield, Illinois, six-year old Michael Myers stabbed his sister to death. Fifteen years later, Michael escapes from a mental institution in Smith’s Grove, IL, and he heads back to Haddonfield with his psychiatrist, Dr. Sam Loomis (Donald Pleasence), hot on the trail. Halloween night 1978, Michael is about to go on a bloody rampage, and high school student and babysitter Laurie Strode (Jamie Lee Curtis) and her friends are his targets.

John Carpenter’s Halloween, more than any other film, was responsible for the 1980’s slasher movie genre. Lunatic/spree killer Michael Myers would influence the horror movies psychos that would wield knives, axes, and assorted sharp and blunt instruments to kill their teenage and 20-something victims in such films as Friday the 13th and Prom Night, especially the characters that had sex sometime during the course of the movie.

Although slasher films are a particularly bloody movie genre, Halloween is relatively free of blood and gore. There are only four onscreen murders (one off screen), and one of those happens at the beginning of the film to establish Michael’s legend. Carpenter spends most of the films first 50 minutes or so establishing mood and atmosphere. Once night falls, Carpenter allows only minimal lighting, so that most of the violence occurs in near total night darkness, which only adds to the creepiness and heightens the scares.

Carpenter also scored the film, and his “Halloween theme” is one of the most famous scary pieces of movie music. The other element that helped Carpenter create such a great horror flick is actress Jamie Lee Curtis, whose appearances in scary movies in the late 70’s and early 80’s made her the quintessential scream queen. Here, she personifies suburban innocence and all-American teen beauty – a flower ready to be plucked – which makes her the perfect victim for a knife-wielding maniac.