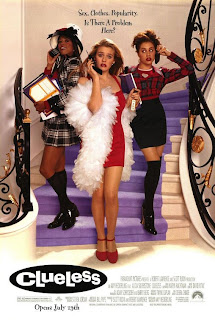 Clueless is certainly one of the most entertaining “teenaged” movies ever made, and it is thus so because of its creator, writer-director Amy Heckerling. Heckerling (Look Who’s Talking) is well remembered for directing another landmark movie about teenagers, the fantastic Fast Times at Ridgemont High, which influenced the pop culture of at least two generations of teenagers and young people after its 1982 debut.

Cher Horowitz (Alicia Silverstone) is a pampered Beverly Hills princess who shops for fine clothes, shoes, and accessories almost non-stop. With her friend Dionne Marie Davenport (Stacey Dash), she is the most popular girl in school. When she draws the ire of her father Mel (Dan Hedaya) for poor grades, she decides that she can earn a better grade from one of her teachers, Mr. Alphonse Hall (Wallace Shawn), by setting him up with a girl friend.

That venture successful, she decides to upgrade the looks of the new girl in school, Tai Fraiser (Brittany Murphy), and to find a boyfriend for Tai. It is during her manipulation of other people’s status that she slowly discovers she is really lonely. Her frustrating search for companionship reveals to her that she is the one who is clueless.

Clueless was probably the first film to capture the attention and bucks of the so-called Generation Y baby boomers. Like the out-of-nowhere hit making band Hanson, Clueless was a surprise success. It captured the flavor and essences of Southern California teenagers from well-to-do and affluent families who could indulge their children with expensive toys, clothes, cars, and other material things. Heckerling ably captures the language and style of these teens, simultaneously poking at and documenting them in her fictional film. Her most important achievement was that she took those character types and made a good film out of it.

The performances are actually understated and accomplished considering that the characters are so over the top. Ms. Silverstone, the youthful blond of the moment for a few years, portrays Cher as thoughtful girl, who truly does understand the needs of others, but strictly through her needs. The goal of the movie seems to be to teach her that she doesn’t have to only help people if it benefits her as much, if not more than, the ones she is helping. Ms. Silverstone subtly travels that path of education all the while keeping her character interesting and entertaining. Sometimes a good character can become a bore during the course of a film when the creators are trying to teach that character a lesson.

The rest of the cast is equally up to the challenge of entertaining. Paul Rudd is quite good as Cher’s stepbrother Josh Lucas, and Dan Hedaya’s Mel is the perfect wrangler for his daughter. There is also a wealth of young Hollywood faces and character actors who take their turn making the world of Cher so vivid, so silly, and so joyous.

And that’s what this movie is - joyous.

Fun, silly, irreverent, it is also a sly commentary on particular group of the youth of America, but the film possesses enough charm that the viewer focuses mostly on the comedy and romance. Only the keenest mind of a killjoy would focus on how vacuous this film can be at times. Heckerling has created a bright, sunny movie that is both smart and enjoyable. Part parody, part satire, and a little farce, Clueless is, alas, simply fun to watch.