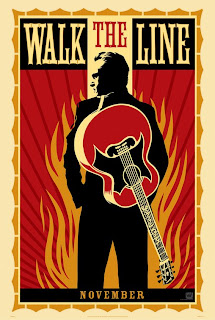 DRAMA/BIOGRAPHY/MUSIC-SONGS with elements of romance

Walk the Line, the Johnny Cash biopic, chronicles Cash’s beginnings as the son of Ray Cash, (Robert Patrick), a poor Arkansas cotton farmer, his rise to fame with Sun Records in Memphis, and his early status as a rock and country music star with Columbia Records. Along the way, Johnny Cash (Joaquin Phoenix) battles an addiction to pills, struggles with his first marriage to Vivian Cash (Ginnifer Goodwin), and meets the true love of his life and his soul mate, June Carter (Reese Witherspoon), a singer Cash admired when he was a poor Arkansas boy and she was a child star singer on the country music circuit of the 1940’s.

Joaquin Phoenix as Johnny Cash is the primary reason Walk the Line succeeds. He plays Cash with equal parts mad abandon and quiet intensity. His Cash is one moment a wild man and the next moment a vulnerable soul desiring an intimate connection with June Carter or perhaps seeking reconciliation with the past. A film biography usually can’t give us the interior substance of the man a book could. However, a film biography can give us some kind of emotional and visual approximation of Cash. That’s what Joaquin does in Walk the Line.

Sadly, the film’s (almost) fatal flaw is the script because it’s shallow. The writers, Gill Dennis and director James Mangold, rely on several elements to give the film its emotional impact. One of them is Cash’s drug use, but the film takes a very surface look at it. Cash uses drugs; he becomes addicted, acts like an ass to his friends and family, and breaks things. That entire sub-plot comes across as what it is – old hat. It’s more annoying than interesting.

Two other important sub-plots are Johnny’s relationship with his father, Ray, and his wife Vivian. Robert Patrick gives a good performance as Ray Cash, but Mangold and Dennis mishandle the relationship (or misunderstood it while doing research for the film). It’s a clunky bit of writing that usually has a strung-out Cash staring oh-so-intensely staring at Papa Cash while Ray simply acts like a mean sumbitch. The film doesn’t need the father-son dynamic to be touchy-feely, but that relationship has no heart, is paper-thin, and the resolution is tacked on for a feel-good ending.

Vivian Cash, expertly played by the stunningly gorgeous Ginnifer Goodwin, gets the same dismissal. Mangold and Dennis once again rely on an old film stereotype, one especially big in biopics – that of the shrewish wife. Vivian is more whiny than happy, and the marriage is more or less played as being misbegotten from the get-go. That’s inaccurate (certainly by the accounts of Cash’s four children by Vivian), and if the filmmakers intended to play the marital strife for dramatic effect, they failed, instead ruining a good character.

The biggest waste in Walk the Line is Reese Witherspoon’s June Carter. As written here, the part isn’t a co-lead; it’s a glorified supporting role. Ms. Witherspoon and Phoenix certainly have some serious screen chemistry. They butt heads, stare deeply at one another, and bicker like siblings – or like longtime lovers. Ultimately, however, the story plays June Carter as being only important because she is something Johnny has to have. Of course, this isn’t really June’s story, but it’s obvious to anyone who sees Walk the Line how important June was to Johnny, though we only get a tantalizing piece here and there.

In Ray, the Ray Charles biopic, actor playing important supporting characters get at least one scene to define his characters both as an individual and as a larger part of the narrative. Walk the Line doesn’t allow this except for June Carter’s part. We also get very little of Johnny Cash’s backup band and or of his industry collaborators and acquaintances. Ray also gave the viewer numerous looks at Ray Charles’ creative process of songwriting, performing, and producing. Other than the concert scenes, Walk the Line gives us very little of Johnny Cash’s creative process.

Still, I found myself getting emotional during much of Walk the Line. There are some powerfully emotional scenes here (for instance, when Johnny first performs for Sam Phillips, founder of Sun Records). Add such magical moments to Joaquin Phoenix and, to a lesser degree, Reese Witherspoon’s performances, and Walk the Line is a special biographical movie.