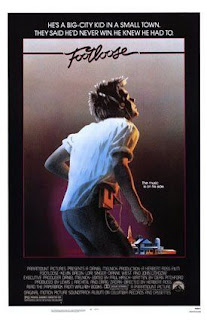 DRAMA/MUSIC with elements of romance

Footloose is a 1984 teen drama in which the story is driven, in part, by its pop music soundtrack. The film was a hit upon its initial release, and the soundtrack sold over nine millions copies, with two songs from the film earning Oscar nominations. Footloose spawned a 1998 Broadway musical and is the subject of a 2011 remake.

Ren, who likes to dance and play loud music, soon learns that dancing and loud music are not allowed in Bomont, mainly because of Ariel’s stern father, Reverend Shaw Moore (John Lithgow). Ren decides that his senior class should have a prom, but he and his small circle of friends may have to take on the entire town, especially the town council, if they want to hold a dance in public.

There is a lot of cheesy synthesizer-driven music on the soundtrack and plenty of weird dance moves are on display. Still, Footloose is actually a good little teen drama. It’s like an ABC After School Special with a soundtrack, and if Dean Pitchford’s script is anything, it is sincere.

The story is rarely overwrought, and Pitchford created familiar characters without making them stereotypes. I’ve seen John Lithgow’s character, Rev. Moore, described as a “bible thumper,” and Moore is not. Even if the character were, Lithgow, an accomplished actor, would never play Shaw Moore as such. He is a complex man who means well and sincerely cares about the people of Bomont. The arc of his character is a journey to make sure that his good intentions don’t pave a road to Hell.

Kevin Bacon made a star turn as Ren in Footloose, and while the character can be a bit overexcited, Bacon makes Ren likeable and genuine. Of course, Sarah Jessica Parker sparkles, showing a hint of what her fans love about her today, and it’s good to see Chris Penn young, in shape, and nice looking – the Chris Penn before the weight, the drugs, and the tragic ending.

Footloose stands the test of time. I think it is as good today as it was 27-and-a-half years ago. I will give it the same grade I gave it back then, and I’d even watch it again. Its story of friendship and small town melodrama are more engaging than quaint.