Will I Am Legend Smith - It's His Movie 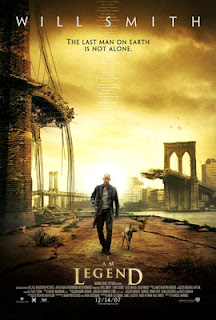 I Am Legend is the third film adaptation of Richard Matheson’s 1954 novel, I Am Legend, following the 1961 film, The Last Man on Earth (starring Vincent Price), and the 1971 film, The Omega Man (starring Charlton Heston). The book also apparently influenced George Romero’s Night of the Living Dead.

Robert Neville (Will Smith) is the last human survivor in what is left of New York City, and perhaps the last man on earth, after a manmade virus – unstoppable and incurable – ravages humanity. Neville, however, is not quite alone. He shares the city with “the Infected,” victims of the plague who were mutated into monstrously fast and powerful carnivorous beings, who can only exist in the dark (and look like the belong in a video game).

For three years, Neville, who is also a brilliant scientist and military virologist, has scavenged for food and supplies. He also sends radio messages hoping to find other human survivors – his only companion a faithful dog named Sam. Immune to the virus, he also continues to search for a cure to the virus, a way to reverse the effects to the virus. Meanwhile, the Infected are watching him, waiting for him to make a fatal mistake, and Neville knows that he is outnumbered and running out of time.

There’s something missing in I Am Legend, and I can’t quite put my finger on it. I know what it does have in its favor – Will Smith, and that’s enough to carry the incomplete things and wash over the bad things. Neville played by Smith seems a powerful force in the lonely canyons and abandoned edifices of New York City – alone because man finally brought about Armageddon all on his own. It was the end of everything, and Satan didn’t have to break a sweat to bring it about, but here is the stubborn Smith-Neville, single-minded in his pursuit to survive and find a way to make hungry monsters human again. That makes him something like a persistent weed or an oblivious roach, or maybe he’s too clueless to remember that quite a bit of humanity was already trading in monstrosity before the virus wiped them out. This complexity of character and the ambivalence and stubbornness Smith gives Neville is what marks Will Smith as a great movie star and exceptional actor. His excellence is both in the process and in how he executes his preparation into fashioning engaging, riveting, mesmerizing characters.

Smith is glorious in a film that traffics in the mundane and sometimes makes intractable boredom the narrative, and what’s amazing is that he does it by playing a character that, while he may earn our sympathy, is largely unattractive. Neville is either slowly going crazy because he is lonely or has already been driven bonkers because he’s so desperate for human contact. He can’t be friends with the Infected who only want to eat him (although one could get the idea that he’d like to be friends). Smith presents Neville as someone, who because of his current state of affairs, should be avoided.

I Am Legend is well-served by the lovely German shepherd, Sam. In a world that has died, a dog is hope, love, friendship, and loyalty on four legs. Director Francis Lawrence, fortunate that Warner Bros. Pictures gave him another chance after Constantine, makes the best of this wonderful dog. Lawrence is also lucky for Smith’s masterful, rich performance and for the incredible CGI work that went into creating an empty NYC. That’s why “the whatever” that’s missing in I Am Legend seems like such a small thing, so Lawrence helms a film that is almost a great sci-fi movie, but is still a really good one.