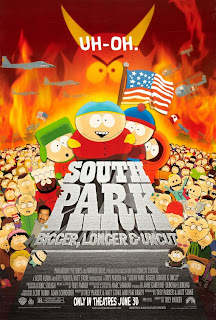 I could list several films that were better than Oscar® winner for “Best Picture” of 1999, American Beauty. One of them is South Park: Bigger, Longer & Uncut, the film version of the hit animated series, “South Park,” on cable television channel, Comedy Central. The film did earn an Oscar® nomination in the category of “Best Music, Original Song,” and it should have won. But where it really counts, the film won – it is as good as the best episodes of the series.

Our heroic quartet: Stan Marsh (Trey Parker), Eric Cartman (Parker), Kyle Broslofski (Matt Stone), and Kenny McCormick (Stone) sneak into a theatre to see the R-rated film of Canadian bad boy duo, Terrance & Phillip, entitled Asses of Fire. The film, a wall-to-wall profanity-laden musical, warps the little boys’ minds, and they begin to freely used the most vulgar language in everyday speech. Kyle’s mother, Sheila Broslofski (Mary Kay Bergman), is horrified, so she leads the other boys’ parents in a massive crusade against Terrance and Phillip.

In true fanatical organized censorship fashion, her coalition against filth goes overboard. The parents pressure the United States government to declare war on Canada (because they generate lots of filth that finds it way to America), and to have Terrance and Phillip publicly executed just before the U.S. military invades Canada. Meanwhile, in Hell, Satan and his homosexual lover, Saddam Hussein (Stone), eagerly await the execution. For when Terrance & Phillip’s blood touches the earth, it will open a portal from Hell to Earth from which Satan and Saddam will launch an invasion.

The quality of the animation (crude and crudely manipulated paper cutout animated figures) and comedy (naughty) of the film is about the same as the TV series, except the hardcore R-rated vulgarity and profanity that would be edited out of even the series makes its way to the film. What the film has that the show doesn’t is a wonderfully satirical and farcical song score. There are certainly better musical and song scores in film history, but none are as ribald, as bold, and as hilarious as these songs.

The most important thing about South Park: Bigger, Longer & Uncut is that it is so subversive. The TV series has always used satire and farce to make political and social commentary. Creators Trey Parker and Matt Stone take their hardest hits at ultra conservative, too liberal, bigoted, and politically correct America. But the part of the U.S. that takes the biggest hit is the dishonesty of adults: lying to children, not explaining to them why they should be protected from certain things, cheating, stealing, and selfishness. Parker and Stone do it while making you laugh so hard at their outrageous sense of humor. I don’t know which is their best talent, humor or commentary; they do both so well that’s it’s unfair to most others who try both.