Review: 1973 Version of "The Three Musketeers" Retains its Comic Charm 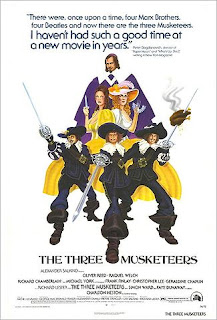 The Three Musketeers is a 1973 swashbuckling comedy film from director Richard Lester (A Hard Day’s Night). This film is based upon Alexandre Dumas père’s 1844 novel, also entitled The Three Musketeers. This is also the first of a two-part film series, the other being The Four Musketeers (1974).

The film opens on young d’Artagnan (Michael York), a country bumpkin trained in the art of the sword by his father. D’Artagnan arrives in Paris with dreams of becoming a king’s musketeer – hopefully with the help of an old acquaintance of his father’s – but he is turned away. He meets and quarrels with three men: Athos (Oliver Reed), Porthos (Frank Finlay), and Aramis (Richard Chamberlain), each of whom challenges him to a duel. After discovering that the three men are real musketeers, d’Artagnan joins them in a brawl with the guards of Count Richelieu (Charlton Heston). Appreciative of d’Artagnan’s efforts, the three musketeers take him on as a kind of musketeer-in-training.

Meanwhile, the Duke of Buckingham (Simon Ward) has slipped into France to see French Queen, Anne of Austria (Geraldine Chaplin), with whom he is having an affair. Richelieu conspires to use the affair to bring down the Queen so that he can have more power over the King, Louis XIII (Jean-Pierre Cassel). Richelieu employs his spy and secret agent, Milady de Winter (Faye Dunaway), to help him.

D’Artagnan has an affair with Constance Bonacieux (Raquel Welch), a married woman who is an aid to the Queen. At her insistence, d’Artagnan decides to help the Queen. Soon the young musketeer wannabe joins Athos, Porthos, and Aramis, as they also seek to oppose Cardinal Richelieu at every turn.

It has been so many years since I read The Three Musketeers that I don’t remember much about it, although the film apparently adheres closely to the novel. I do remember this movie, though. I watched it and its sequel several times when I was a child and I loved it – love is the right word to use. Before I watched it again recently, I wondered if I’d still like it. It turned out that I still love this movie.

Lester and screenwriter George MacDonald Fraser inject a lot of humor into the story. In fact, the film emphasizes comedy over character, although the script gives each character a personality that is important in the context of the role he or she plays. The cast, which is composed of mostly veteran and talented actors and movie stars, makes the most of the material. For instance, Charlton Heston’s stout turn as Richelieu allows the character to be a villain, but an impeccable sense of timing also allows Heston to make the character menacing or mischievously funny, as necessary.

The Three Musketeers also tweaks the conventions of the swashbuckling movies of the 1940s and 50s. The film does the kind of lavish sets and art direction and sumptuous costumes that would make a 1940s MGM period film proud. However, director of photography David Watkins shot this movie with an eye for period detail, so he captures a squalid, more impoverished, and earthier reality as equally as he captures splendor. This makes the movie loose and energetic, rather than stiff and formal.

The Three Musketeers’ fight scenes are not fancy fencing duels like something out of an Errol Flynn movie. Rather, these fights are staged as brawls with the combatants using fists and knees as much as swords. In fact, furniture, food, sticks, and any objects at hand (even wet laundry) sometimes assist or replace swordplay.

When I first saw The Three Musketeers, I was too young to understand the bawdy humor and double entendres. Now, I see how Michael York strikes the perfect tone as d’Artagnan and also how the strikingly handsome Oliver Reed made the most of what is basically a supporting role. Raquel Welch as Constance and Faye Dunaway as Lady de Winter are devastating scene stealers; there could have been a movie built around just the two of them. The Three Musketeers is a childhood favorite that doesn’t disappoint the adult me.