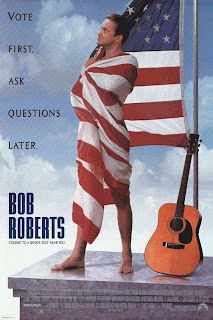 Tim Robbins scathing satirical comedy was probably preaching to the choir and converted in 1992, in particular to moderates, liberals, and leftists frustrated by 12 years of Republicans being in the White House. Still, the film’s blend of campaign antics, singing, music videos, and political scandal made it arguably the best comedy of the year. Robbins performed a rare trick. Wearing three hats: writer, director, and star, he still managed to make the film as much about the American political landscape of the time as it was about Bob Roberts. For all the preaching, the movie is just plain funny, and is in the tradition of that most famous faux documentary film (or “mockumentary”), This is…Spinal Tap. In fact, the film even has a scene that is a sly homage to Spinal Tap (Roberts and his campaign staff wandering through the bowels of a building trying to find their destination).

Robbins, who received a 1996 Golden Globe nomination in the category of “Best Performance by an Actor in a Motion Picture – Comedy/Musical,” is brilliant as the reptilian, Bob Roberts, who is the kind of rich man that likes to act as if he’s just an ordinary guy – the common man. He blends folk and populism into a slick huckster that says all the right catchphrases to appeal to wealthy conservatives and also to the middle class and working class white people (and some Uncle Toms) who still chafe over the changes wrought by the Civil Rights Movement, the Women’s Rights Movement, the anti-Vietnam War protests and other social movements of the 1960’s and early 1970’s. Also quite entertaining are the folk songs, written by Tim and his brother David Robbins (who also composes the film score), which are full of dead-on right wing, ultraconservative, Republican vileness, venom, misinformation, and propaganda. Plus, each diddy has an uncanny ring of truth that in a way appeals even to moderate and liberal sensibilities.

The film also has standout performances by Giancarlo Esposito as a relentless fringe media reporter and Ray Wise as Robbins’ always-on-the-ball and rarely caught off guard campaign handler, Chet MacGregor. Brian Murray provides a steady, soothing voice as the documentary filmmaker/narrator who keeps everything linear and in order so that the audience understands what’s going on. Look for a small gem of a part by Jack Black, as an intense Bob Roberts acolyte. Actually, all the performances have so much verisimilitude that they, along with many others elements of this film, make Bob Roberts uncomfortable to watch. It hits too close to home, and Americans don’t want anyone, including other Americans, pointing out their blemishes, especially when Americans are well aware our dark side – so much so that they’re trying to keep them in the closet, so to speak.

The surprising thing is that 13-years later, this film is still as funny as it was in 1992. In fact, its socio-political commentary (about right wing politics, sound bite political campaigns, slick, ready-for-TV candidates, shadow governments, “illegal” or trumped up foreign wars and covert operations; and slow moving, old school liberal politicians unable get their message to voters or make themselves appealing to voters) is truer today than it was then, making Bob Roberts something rare – a visionary political film both timely and timeless. Even when it becomes surreally bogged in conspiracy towards the end, Bob Roberts keeps it real. It reminds this Louisiana boy too much of the almost successful U.S. senatorial and gubernatorial campaigns of a former Klansman and how popular this racist was at both his and my old alma mater, Louisiana State University.

NOTES:
1993 Golden Globes: 1 nomination: “Best Performance by an Actor in a Motion Picture - Comedy/Musical” (Tim Robbins)
Posted by Leroy Douresseaux at 7:36 AM