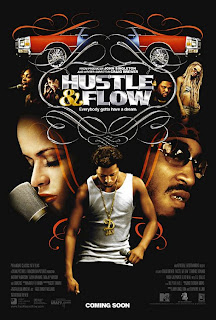 DJay (Terrence Dashon Howard) seems like the typical philosopher-hustler – misusing his gift for words as a streetwise pimp living a dead end life on the fringes of Memphis society. Hearing that a former Memphis deejay named Skinny Black (Ludacris) has an album that went platinum makes DJay wonder what happened to all the big dreams he had for his life.

DJay has a chance encounter with Key (Anthony Anderson), an old friend who is a sound engineer. Key also has dreams of being in the music business, and that spurs DJay, who realizes that if he’s going to make his mark, this might be his last chance. He begins writing freestyle raps, and Shelby (DJ Qualls), a church musician with a beat machine, joins DJay and Key to lay down some bass crunching tracks. His housemates, Shug (Taraji P. Henson), an expectant mother, and Nola (Taryn Manning), a young woman DJay pimps out of his car to johns, join him in the creative process as DJay works this new hustle to create the flow that will take him to a better life.

Craig Brewer’s Hustle & Flow feels so real that the Memphis heat radiates off the screen and made me feel uncomfortable. Simply put, Hustle & Flow is a gritty and grimy drama that captures the desperate essence of hustlers, would-be artists, and struggling artists. Brewer who won the Sundance Film Festival Award in the category “Dramatic” for this film that recreates the real world of low level street pimps and drug dealers; this isn’t the prettified, “super fly,” rap version of pimping and dealing. Brewer’s film is so authentic that it, at times, seems like a documentary that has overdone keeping things real. Still, Brewer uses the first scene in which DJay, Key, and Shelby create a musical track to shock the film into a vibrant life that forces us to focus on this creative trio.

Terence Dashon Howard is a star on the rise, and this performance affirms that. His DJay is an earthy guy who is so common that he barely registers to anyone outside the few women in his life. Howard creates a character that is desperate and hungry, but even more resigned to a life that will soon finish him. Watch Howard bring him to new life as DJay realizes he has a goal; Howard modulates the performance so that neither DJay nor the story every come across as inauthentic to the audience.

Howard and Brewer aren’t alone in their efforts at make this a winning film. Taraji P. Henson’s Shug is so genuinely needy, and as Nola, Taryn Manning molds her performance to give it a contour that perfectly fits the ebbs and flows of Howard’s DJay. Anthony Anderson gives a quiet, but surprisingly nimble dramatic turn that tells us that Hollywood has barely tapped his talents. DJ Qualls also adds a small, but different flavor as the beat maker who is uncannily in sync with everyone else.

Hustle & Flow is not only one of the best dramas set amongst the black folks who live in squalor and deep poverty in a long time, but it rings with truth as few urban dramas have since Boyz N’ the Hood, the directorial debut of John Singleton, who is this film’s co-producer and the man who self-financed the film. I can only hope that Craig Brewer keeps bringing us back to this kind of real thing.

NOTES:
2006 Academy Awards: 1 win: “Best Achievement in Music Written for Motion Pictures, Original Song” (Jordan Houston, Cedric Coleman, and Paul Beauregard for the song "It's Hard Out Here for a Pimp"); 1 nomination: “Best Performance by an Actor in a Leading Role” (Terrence Howard)