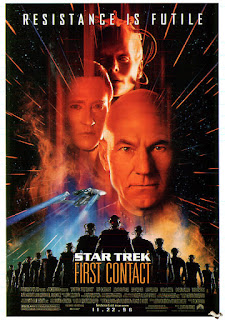 The subject of this movie review is Star Trek: First Contact, a 1996 science fiction drama and thriller from director Jonathan Frakes, who is also a Star Trek cast member. First Contact is the eighth movie in the Star Trek film franchise.

The cast of the syndicated series, “Star Trek: The Next Generation” returns in their second Star Trek feature film, Star Trek: First Contact. This time, Captain Jean Luc-Picard (Patrick Stewart) leads the crew of the newly commissioned U.S.S. Enterprise-E in a battle against one of the most feared villains of the TV series, the Borg, a sinister alien race of half-machine, half-organic beings.

Once upon a time, the Borg captured Picard and assimilated him into the Borg collective, re-naming him Locutus. Although Picard escaped (which is rare), he never forgot or forgave the Borg for the experience. As First Contact begins, the Enterprise-E is on a routine patrol when Picard gets a message from Starfleet Headquarters that the Borg have entered Federation space and are on a direct course for Earth. Although his orders are to stand down, Picard has the Enterprise enter the fray, and he leads the attack that destroys the Borg ship. Before their ship is destroyed, the Borg jettison an escape pod, which the Enterprise follows. Scanning the pod, the Enterprise discovers that it is entering a time vortex, so Picard has the Enterprise follow it through the vortex.

The Borg have gone back in time to attack Earth when it is vulnerable, a dark age just after World War III. Picard and crew learn that they have come back precisely on the day of April 4, 2063, which is 24 hours before the most momentous day in human history – April 5, 2063 – First Contact. Commander William Riker (Jonathan Frakes) and Lt. Commander Geordi La Forge (LeVar Burton) land on this Earth of the past to help a shabby scientist, Dr. Zefram Cochrane (James Cromwell), keep his date with destiny. Meanwhile, Picard, Lt. Commander Worf (Michael Dorn), the remaining Enterprise crew, and a guest from the Earth below, Lily Sloane (Alfre Woodard), fight to keep the Borg and their Borg Queen (Alice Krige) from using the ship to destroy the future, as they know it.

Star Trek: First Contact is the best of the four films spun from “The Next Generation,” and it’s an old fashioned romantic adventure (with “romance” in this instance not meaning “love”). ST:FC blends pulp sci-fi with the optimism of the original Star Trek. The central line of conflict – Picard and Worf’s attempts to save the Enterprise-E crew from being turned into Borg drones – is riveting. Towards that end, Patrick Stewart, Michael Dorn, and Alfre Woodard shine in showy roles.

The rest of the story that takes place on mid-21st Earth – Riker and La Forge’s quest to help Zefram Cochrane make history – is a pleasant diversion from the heady action on the Enterprise. It is here that the writers reveal the ingenuity of the plot – that of man both in his past self and his future self fighting all manner of obstacles to reach the stars. Humanity literally has to be ready for anything, and has to be ready to create out of chaos. If you choose only to watch one Star Trek film, First Contact would be a fine choice.