Review: "Star Trek: Nemesis" Something of a Misstep 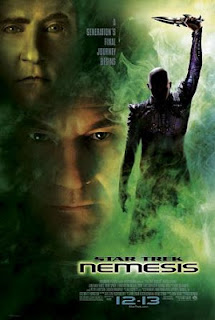 The subject of this movie review is Star Trek: Nemesis, a 2002 science fiction-action film from director Stuart Baird. Nemesis is the tenth entry in the Star Trek film franchise and was the last film in the franchise until the reboot, entitled Star Trek, in 2009.

The cast of the TV series, “Star Trek: The Next Generation” returns for its fourth (and final) feature film, Star Trek: Nemesis. Captain Jean-Luc Picard (Patrick Stewart) and the crew are celebrating the marriage of long-time lovers, Commander William T. Riker (Jonathan Frakes) and Counselor Deanna Troi (Marina Sirtis) when the Federation sends the Enterprise-E into the territory of the Federation’s old enemy, the Romulans. Picard is shocked to learn that the Romulan government is now run by a citizen of Remas, the sister of planet of Romulus.

The new Praetor Shinzon (Tom Hardy) requests that Picard beam down to the capitol city so that he may negotiate a truce with the Federation. Upon meeting Shinzon for the first time, Picard discovers that the Praetor has a shocking connection to him, and that Shinzon’s negotiations are merely a ruse for his planned attack on Earth.

The most dour and least successful Star Trek film at the box office, Star Trek: Nemesis will probably only find deep love from Trek devotees. The dramatic conflict between Picard and Shinzon is riveting, but at times this personal conflict drags on the rest of the film. Everyone and everything else is pushed far into the background, and when another character does come forward, it seems like an underdeveloped subplot. Entertaining, Star Trek: Nemesis is also clunky and listless, and it really seems like an episode of a TV show gussied up and also stretched past the point where it should have ended. It is, however, sad to see this part of the Star Trek franchise end, and this movie is not worthy of being that closing chapter.

Posted by Leroy Douresseaux at 6:34 AM