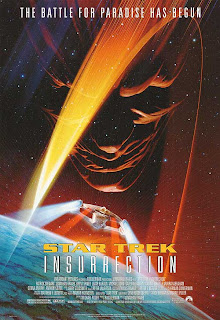 SCI-FI/ACTION/DRAMA with elements of mystery

The subject of this movie review is Star Trek: Insurrection, a 1998 science fiction-action movie from director Jonathan Frakes, who is also a Star Trek cast member. Insurrection is the ninth film in the Star Trek film franchise.

The television cast of “Star Trek: The Next Generation” (1987-94) blast into its third Trek feature film, Star Trek: Insurrection. Captain Jean-Luc Picard (Patrick Stewart) leads his crew of the U.S.S. Enterprise-E to a mysterious world where metaphasic radiation has altered the aging process of its 600 inhabitants. The Federation (of which the Enterprise is a representative) has been secretly studying the inhabitants of the planet, humanoids known as the Ba’ku.

Data (Brent Spiner) was part of the research team on the planet, but he inexplicably rebels against them and attempts to destroy the secret research station. As Picard and company try to unravel why Data went berserk, they slowly unravel a conspiracy involving Vice-Admiral Dougherty (Anthony Zerbe), a shady Federation high official, and Ad-har Ru’afo (F. Murray Abraham), an alien leader determined to harness the planet’s power – even if it means the destruction of the Ba’ku.

Star Trek: Insurrection is an entertaining Star Trek flick, not great, but entertaining, still. As Capt. Picard, Patrick Stewart once again soars with the character, giving him more dramatic punch than in the TV series. Jonathan Frakes also improves on Commander William T. Riker, making him an affable fellow and a stout warrior (too bad we won’t get a Trek series with him as the lead). This film is notable for Oscar winner (and multiple nominee) F. Murray Abraham playing a Trek villain. Abraham is a great all-around actor who infuses his roles with drama, and his presence always enriches those films in which he appears – as he does with Star Trek: Insurrection.

Posted by Leroy Douresseaux at 11:57 AM