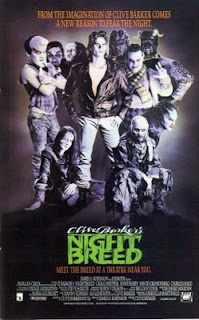 FANTASY/HORROR with elements of drama and thriller

The subject of this movie review is Nightbreed, a 1990 fantasy and horror film from writer-director Clive Barker. The film is based on Barker’s 1988 novella, Cabal, which was originally published as hardback book along with some of Barker’s short stories. The film follows a young man wanted for murder who joins a tribe of monsters and outcasts, called the “Nightbreed,” that also hides from humanity.

Nightmares of a place called Midian haunt the dreams of Aaron Boone (Craig Sheffer). His dreams tell him that Midian is the place of monsters, but his therapist, Dr. Philip K. Decker (David Cronenberg), tells Boone these dreams are the byproduct of a guilty conscience. You see, Decker insists that Boone is a serial killer, but the truth of the matter is that Decker is the real killer. He’s pinning the crimes on Boone, his vulnerable patient. A chance encounter with a raving madman, however, gives Boone directions to Midian, somewhere in rural Canada. What Boone finds is that Midian is a large and peculiar graveyard, and below its graves live strange and wondrous creatures and monsters. One of them attacks and bites Boone.

Decker’s deception leads to Boone’s death, but he arises to find himself back in Midian’s underworld, the lair of the Nightbreed. Now, he must save his new family and his girlfriend Lori Winston (Anne Bobby) from Decker’s elaborate fraud and murderous intensity. Meanwhile, the local law has gathered a gun-toting, bloodthirsty mob, and they’re on a hunt for Nightbreed trophies.

Clive Barker has stated in the past that his 1990 film, Nightbreed, was meant to be “the Star Wars of monster movies,” but disagreements with the studio producing the film meant that Nightbreed was not released to theatres in the version Barker wanted movie audiences to see. Still, what is on the screen is stylish and distinctive, and Danny Elfman’s score creates the perfect harmony for this dreamlike fairy tale. Barker’s vision of supernatural creatures and human freaks of nature living in a secret underground world (beneath a cemetery), right under the noses of normal human society is attractive to anyone with a vivid imagination or who feels vastly different from the mainstream.

The special effects and make-up effects seem dated 17 years later (as of this writing), but this concept’s blend of human drama, dark fantasy, weird horror, and social commentary (prejudice and intolerance) is worth a look by the adventurous, inspired movie lover.