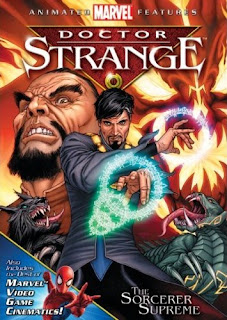 A selfish and vain physician, Dr. Stephen Strange (Bryce Johnson), loses the use of his hands in an automobile accident. Although he is no longer able to perform surgery, he can still be a doctor, but he has always seen himself foremost as a surgeon. Putting his career on hold, Strange obsesses over finding a cure for his hands, and as his career dies, Strange falls apart.

Directed by a stranger named Wong (Paul Nahauchi), Strange makes a life-altering journey to Tibet, where he hopes to be healed by the Ancient One (Michael Yama). However, this Ancient One is Earth’s “sorcerer supreme,” and he has plans to heal more than just Strange’s hands. With the help of Wong, Stephen studies magic and learns to let go of the past. As Strange’s knowledge of and ability to wield mystical powers grows, the Ancient One hopes Strange will replace him as the sorcerer supreme, much to the chagrin of Mordo (Kevin Michael Richardson), a follower of the Ancient One who covets his master’s position and power. Soon, Stephen must embark on a mission to protect humanity from a dark, other-dimensional god called Dormammu (Jonathan Adams), but he and the Ancient One will discover a traitor in their midst.

Doctor Strange is by far the best of the Marvel/Lionsgate films to date. It is the first of this series that is equal to Warner Bros.’ animated television series and straight-to-video animated films that are based on DC Comics characters. Doctor Strange’s story is strong – capturing the rise and fall and redemption of the protagonist. It has an epic feel, a good supporting cast, and convincingly evil adversaries.

The animation is quite good, as the characters, creatures, and objects move very well. The layout, background art, set decoration, and conceptual design are all top notch, and the color has a painterly quality. Considering all that, Doctor Strange does indeed seem strange next to the earlier MLG animated films, which while entertaining, do not match the excellence of Doctor Strange.

Posted by Leroy Douresseaux at 5:26 AM