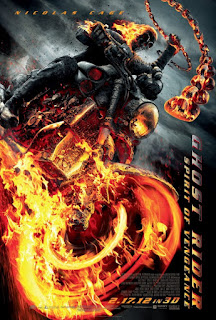 The subject of this movie review is Ghost Rider: Spirit of Vengeance, a 2012 superhero, action, and horror movie from directors Mark Neveldine and Brian Taylor, who jointly work under the moniker, Neveldine/Taylor. Ghost Rider is a Marvel Comics character that was created by writers Roy Thomas and Mark Friedrich and artist Mike Ploog and that first appeared in the comics magazine, Marvel Spotlight #5 (1972).

Ghost Rider: Spirit of Vengeance opens in a monastery in Eastern Europe. There, the monk, Benedict (Anthony Head), and his brothers are hiding a mother, Nadya (Violante Placido), and her son, Danny (Fergus Riordan). Apparently, the Devil Mephisto wants Danny in order to complete some kind of ritual.

A French priest named Moreau (Idris Elba) decides to take matters into his own hands after Mephisto’s forces attack the monastery. Moreau seeks out Johnny Blaze (Nicolas Cage), who is also the Ghost Rider, the fiery spirit of vengeance whose head is a flaming skull. Blaze sold his soul to Mephisto, who is currently going by the name, Roarke (Ciaran Hinds), which is why the Ghost Rider is inside him. After Ghost Rider proves to be too much of problem for him, Roarke turns one of his stooges into Blackout (Johnny Whitmorth), a supernatural creature that can take on the Rider.

One thing I can say about the directing team, Neveldine/Taylor, is that the duo has style, and Ghost Rider: Spirit of Vengeance has got style. The film is visually snazzy, spunky, and even cool. The action scenes are quite good, and the computer effects (CGI) don’t look phony and are an improvement over the CGI in the first film.

The story is different, seeming unique although it mines familiar territory – the hero trying to save a vulnerable woman or child from being possessed by the Devil. That’s probably because Spirit of Vengeance is not like other movies based on comic book superheroes, and of course, Ghost Rider isn’t like other superheroes. The script has some good ideas, which is not surprising considering that one of Spirit of Vengeance’s screenwriters is David S. Goyer, who has written horror movies and movies based on comic books, including the Blade franchise, which combines both.

Still, I find Ghost Rider: Spirit of Vengeance to be much better than the first film. The action and the visual effects pop enough to make me actually want more of this.