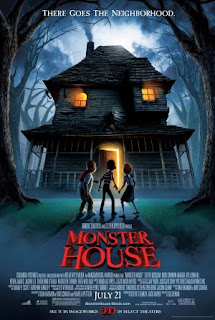 The new computer-animated film, Monster House, isn’t just a kid’s film, and even if it were, it’s not just any kid’s movie. Monster House is a genuine horror movie, but one made for family viewing (perhaps a little too intense for younger than 8 or 9), and its roller-coaster, action movie ending makes the movie a bit more than standard computer animated fare. Free of all those sometimes annoying pop culture references that beset so many other computer animated films, Monster House is just a good solid ghost story told in a way that will scare the kids and has enough fright to engage older minds.

He’s on the verge of puberty, but when his parents head away for the weekend, DJ (Mitchel Musso) still gets a babysitter. To make matters worse, that very afternoon, DJ had a run-in with Nebbercracker (Steve Buscemi), the neighbor who lives across the street in the rundown old house. During their confrontation, Nebbercracker seemingly dies, but that’s not the end of the story. Nebbercracker’s death apparently brings the old house to life as some kind of monster. The front door grows spiky teeth out of boards, and the rug in the front hall becomes a monstrous tongue that darts outside and snatches unsuspecting visitors. Anyone who steps foot on the lawn is monster house food.

The house seems to have a special hate for DJ, so he calls for the assistance of his best friend, the chubby prankster, Chowder (Sam Lerner). It’s not long before the boys add the final piece to their heroic trio when they save the life of Jenny (Spencer Locke), a beautiful young girl about the age of DJ and Chowder, who unwittingly stops by the monster house to sell school candy. It seems, however, that no adults will believe them that the house across from DJ’s is a living, breathing, scary monster. It’s up to them to save the neighborhood, but will it cost them their own lives.

Executive-produced by Steven Spielberg and Robert Zemeckis, two Oscar-winning directors and sometime partners, Monster House is shot in motion-capture animation, the process Zemeckis used for his 2004 film, The Polar Express. In motion-capture, the performances of the live actors are filmed; then, the live action photography is used as a model for the motion-capture computer animation. Monster House, however, looks more like such 3-D animation films as Madagascar or The Incredibles than it looks like The Polar Express.

That said – I like the animation in this movie. Both the characters in their design and in the way they move look like something from one of Tim Burton’s stop-motion animated films (Nightmare Before Christmas and Corpse Bride). The film doesn’t look flat, and the characters almost seem like puppets on a set. This unique look makes Monster House stand out from the rest of the jam-packed computer-animation crowd (and 2005 is heavy with 3-D animation).

In terms of story, Monster House looks and feels like something Spielberg or Zemeckis (Back to the Future, Forrest Gump) might have done two decades ago. The story’s setting is vaguely anachronistic, partially situated in the 1980’s, but with some touches that have only recently come into existence. The story has the distinct flavor of Spielberg’s mid-80’s anthology series, “Amazing Stories,” and even a little bit of “Tales from the Crypt, the late HBO series of which Zemeckis was one of the executive producers. Most of the audience will recognize the familiar plot – the neighborhood ghost story or the monster in the house down the street.

Monster House is just a well done film. From the wonderfully vivid colors to the fast-paced scares and thrills, it engages all ages. The lead characters: DJ, Chowder, and Jenny and the young voice actors who play them are appealing with winning comic personalities – giving a human touch to this computer-produced film. Even the supporting voice performances are good (Nick Cannon gives a surprisingly nimble and funny turn as a daffy rookie cop.). That’s why Monster House captured my attention and imagination and gave me thrills and chills the whole way through. Monster House does have a few lapses, but anyone willing to give it a chance just might find a good time. It’s one of those magical summer treasures that the kid in all of us loves to find in our favorite theatre.

Posted by Leroy Douresseaux at 11:06 AM