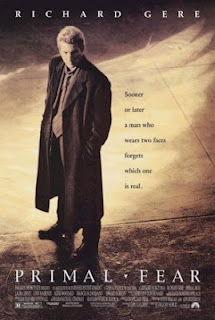 The subject of this movie review is Primal Fear, a 1996 courtroom drama and legal thriller starring Richard Gere and Laura Linney. The film is based on William Diehl’s 1993 novel, Primal Fear. This movie was also actor Edward Norton’s feature film debut, for which he earned a best supporting actor Oscar nomination.

I’ll begin with a minor spoiler warning, so skip to the second paragraph if you don’t want to know how the movie ends. I was thoroughly and completely happy that the murderer beats the system in the end; he was my hero throughout the movie. I enjoyed that he trumped the skuzzy and dishonest State’s Attorney John Shaughnessy (John Mahoney of TV’s “Fraiser”), who uses murder, intimidation, and lies to get his way like so many dirty people in district attorney and state’s attorney’s offices. Hooray to chaos! Damn the corrupt system! Now, on to the movie.

Richard Gere has spent the better part of three decades shining his lovely face in numerous films, although his skills as a thespian are usually in question, there is no doubt that he is a good movie star. He has an obvious, almost forced, charm, but he is also a charming rogue. He doesn’t bury himself in method acting; he simply plays the character as himself. It can be argued that no actress of similar skill and of similar shaky box office pedigree would continue to get choice projects, but then there’s Madonna.

In Primal Fear, Gere is the arrogant defense attorney Martin “Marty” Vail, and he just taken on the case of Aaron Stampler (Edward Norton) who has been arrested for the savagely murdering a popular bishop (Stanley Anderson). State’s Attorney Shaughnessy wants the death penalty, and he sends one of Marty’s former girlfriends and co-workers, Janet Venable (Laura Linney) to prosecute the case. Yes, Marty also has a history with the Shaughnessy, who was his boss not so long ago.

Gere is himself, and I can’t see any indication that this performance would standout amongst any others unless they were really bad. Laura Linney can certainly play the tough “cookie,” who roles with punches, taking anything life or ex-lovers have to throw her way. It’s always good to see the under utilized Alfre Woodard (as Judge Miriam Shoat) and John Mahoney is fun in practically anything.

Good performances by most of the cast aside, the scene stealing, showstopper is Edward Norton in this, his first film role. The fact of the matter is that Primal Fear is average potboiler without him. He so embodies his roles (he has more than one part, sort of) that you can’t help but be drawn into him. No matter what happens, you’re rooting for the boyish and obviously innocent and naïve country kid who was taken in and abused by the mean old city. He uses his entire body to become his character: gestures, facial expressions, hair, the way her wears his clothes, etc.

Director Gregory Hoblit, a director of episodic television, was lucky to have him. Norton transforms Hoblit’s film from a minor studio legal thriller that would have wound up in home video hell into something worth recommending to friends over and over again.

1997 Golden Globes, USA: 1 win: “Best Performance by an Actor in a Supporting Role in a Motion Picture” (Edward Norton)