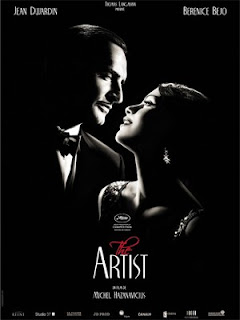 The Artist is a 2011 French romantic comedy and drama done in the style of a black and white silent film. It should be noted that although the film is French, what dialogue it does have is in English. The Artist won the Academy Award for “Best Picture,” one of five it won at the 84th Academy Awards (February 2012). It was the first primarily silent film to win the best picture Oscar since 1927 and the first black and white film to win since Schindler’s List (1993).

The Artist was also one of the best reviewed films of the year (if not the best). I had my doubts, but after seeing it, I can say that it is indeed a fine and exceptional film. It is a true feel-good movie, and is also visually quite beautiful.

The Artist opens in 1927 and finds silent film star, George Valentin (Jean Dujardin), posing for pictures with his dog and frequent film sidekick, Jack the dog (Uggy). That is when he meets aspiring actress, Peppy Miller (Bérénice Bejo). George and Peppy strike up a friendship that creates newspaper headlines, and soon Peppy is getting small parts in some films.

George’s boss at Kinograph Motion Picture Company, Al Zimmer (John Goodman), informs his star that silent films are about to be replaced by “talkies,” motion pictures with a sound. As silent films fade away, Peppy’s career begins to rise. How will George survive in this new era in motion pictures and will his relationship with Peppy survive all the changes occurring in this new world?

Some of you, dear readers, may groan when I say that I found The Artist to be inimitably charming. Well, it’s true; this movie has a lot of charm, and I think its charm is what wins people over. There is a simplicity in the storytelling here that reminds viewers that movies don’t need a wall of surround sound noise and the tsunami of cinema technology to create something that wins hearts and captures imaginations.

For a little over two decades, beginning especially with Terminator 2: Judgment Day and personified by Jurassic Park (1993), movie making (in general) and the Hollywood filmmaking industry (in particular), have been on an inexorable march towards post human cinema. Movies seem to be mostly generated inside a computer, but The Artist harks back to what is still pure about movies. A group of people in front and behind the camera come together and ply their trade, show off their skills, and let their humanity show.

Taking advantage of the human body and face’s ability to express emotion, ideas, and even thought, actors Jean Dujardin and Bérénice Bejo embody Michel Hazanavicius’ delicate but spry love story. In The Artist, the people are the show, not science, although I imagine that it took cinema-tech to bring us back to early filmmaking and to remind us of people power in film. The Artist deserved its Oscars.