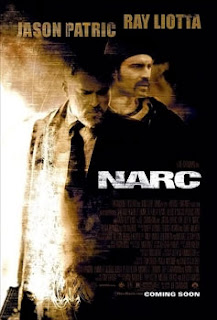 The subject of this movie review is Narc, a 2002 crime film from Joe Carnahan and starring Ray Liotta and Jason Patric. The film is about corrupt police involved in the drug trade in Detroit, Michigan.

Writer/director Joe Carnahan’s Narc is the kind of gritty cop film, that if done right, will make select audiences and critics sit up and take notice. Add a punch in the face and to the stomach ending and we have a film that actually gets better as it goes along, racing to a blistering climax. This is both a writer’s and an actors’ film, although the directing, photography, and editing are all quite good – lots of clever and quick cuts, extreme close-ups, and a sense of claustrophobia to go with all that washed out, bluish lighting that pervades the film.

In the film, Nick Tellis (Jason Patric), an undercover narcotics officer banished indiscriminately shooting at a suspect, returns to the Job to investigate the unsolved murder of a fellow narc, Michael Calvess (Alan Van Sprang). Tellis requests that Calvess’ partner Henry Oak (Ray Liotta) assist him in the investigation, but Detective Oak is one of those violent hot-tempered cops who need to be leashed. He has a record of battering suspects and wants nothing more than to do worse to Calvess’ murderers.

Both Liotta and Patric are way underrated actors in that neither one will ever be a big time matinee idol, but both are very good actors. Each has a knack for playing hard-nosed, but neither is a pretty boy. If a character needs to be “searing,” especially in a dark drama, either one is the man for the part. Liotta even has a stunning Oscar-worthy moment in Narc that, in the end, failed to earn him an Academy Award nomination.

Carnahan’s script for Narc is densely plotted, as the Calvess’ murder investigation is actually more than just an attempt to find the cop killers. It involves politics, convoluted and complex personal relationships, police procedure, hypocrisy, and redemption. Carnahan only hints at the larger personalities of Tellis and Oak, choosing to focus on their characteristics and personalities as they relate to being cops. In that vein, Narc is a complex, searing, and ultimately disheartening and frustrating look at the cop culture. Thrilling, riveting, and mesmerizing are just a few of the words that I could use to describe just how strongly this film holds the viewer in its sway. It is suffice to say that Carnahan (who is scheduled to direct Mission: Impossible 3) explodes our preconceptions much in the way his characters find out that little is what it seems. By the end of this movie, Carnahan leaves you crying for an encore.