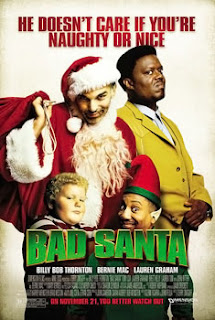 COMEDY/CRIME with elements of drama

The subject of this movie review is Bad Santa, a 2003 crime comedy and Christmas movie from director Terry Zwigoff. Although Glenn Ficarra and John Requa are credited as the film’s only writers, Joel Coen, Ethan Cohen, Arnie Marx, and Terry Zwigoff performed various rewrites of the script, with the Coen Bros. also credited as executive producers on the film. Bad Santa was the late actor John Ritter’s last film appearance.

Some bovine in the media have already asked, “Is nothing sacred?” in response to director Terry Zwigoff’s (Ghost World) new Christmas movie, Bad Santa. They can get over it. Bad Santa is the Christmas movie for the rest of us – those who don’t buy all the must-be-happy hype, over consumption, and phony religious tradition. Besides, it’s so damn funny.

Willie (Billy Bob Thornton) is a department store Santa. He’s also a lecherous, nympho-manical alcoholic. For the past several holiday seasons, Willie and his dwarf partner, Marcus (Tony Cox), play Santa and elf in department stores. They case the businesses and eventually rob the store safes of tens of thousands of dollars. They move to Arizona for their next big heist, but they run into a few problems. One is fastidious store manager (John Ritter in his final film role). Another is a sly store dick (Bernie Mac) who discovers their scam and wants in on the action. The biggest stumbling block is when a lonely, strange boy (Brett Kelly) whom Willie calls The Kid, latches onto Willie for friendship.

The movie has a few rough and dry spots, but otherwise it’s hilarious. Bad Santa is dark, foul, and vulgar, but it’s not cynical. Many of the characters are just not the kind usually found in holiday fare. These are people who live on the periphery of society, lonely people, and criminals. Willie is depressed and suicidal. The Kid may not be mentally handicapped, but he’s a bit of a retard – euphemistically speaking. As dark as it is, however, Bad Santa is quite hilarious in the way it deals with frank sexual matter, people who are frankly sexual, and conniving criminals who’ll do whatever it takes to get what they want. Maybe the most frightening thing for many people is how much profane language is directed at children in the film. Willie consistently curses at The Kid, and as Santa, at children who come to the store to sit on his foul lap.

But Thornton is a fine actor with grand talent. His Willie is a living, breathing, and believable person whose life is falling apart. He and Zwigoff handle Willie’s transformation with subtleness and a kind of brazenness that surprises the viewer at each turn. In fact, Zwigoff masterfully directs the film, knowing, except for some poor moments, just when to hit the viewer on the head with blunt coarseness and when to gently splash the mire in our faces. Zwigoff pulls off the trick of making this film roughly anti-sentimental and sentimentally rough. In a way, Zwigoff does manage to make the typical Christmas movie, and it’s good that he does it the way he does.

I heartily recommend Bad Santa to anyone who can take it. This film also has one of the better Bernie Mac performances. This is the moment he proves that he is a comedian and an actor, and it’s in performances like this that he can find the road to being both a good comic and dramatic actor. Good Bernie Mac is always reason to see something.