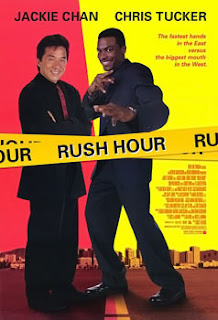 The subject of this movie review is Rush Hour, a 1998 action comedy film from director Brett Ratner. The film stars Jackie Chan and Chris Tucker and was the first in a franchise of three films (thus far).

In the action/comedy, Rush Hour, the Fastest Hands in the East meet the Biggest Mouth in the West when two detectives from different worlds come together. They quickly discover that they don’t like each other, but are forced to work together to save the life of a little girl.

Hong Kong Detective Inspector Lee (Jackie Chan) comes to the United States to assist in the investigation of a kidnapped girl. The girl, Soo Young (Julia Hsu), and her father, Consul Han (Tzi Ma), the head of Hong Kong’s U.S. consulate, are close friends of Lee. However, the FBI doesn’t want Lee to participate in the investigation. Detective James Carter (Chris Tucker) of the LAPD also wants to get in on the investigation, but the FBI only wants him around to be escort Lee and keep him away from the investigation. Neither Lee nor Carter is willing to be relegated to the sidelines, and they begin their own mission to rescue the Soo Young. However, they’re up against the mysterious Hong Kong crime lord Juntao and his vicious henchman, Sang (Ken Leung), so Lee and Carter are getting all they can handle and more.

Rush Hour succeeds because of the chemistry between the two leads. Jackie Chan and Chris Tucker seem like a natural fit. Perhaps, one of the reasons the pairing works is because each actor has several scenes alone, which allows each actor to do the things that audiences expect of him – martial arts from Chan and brash, edgy, streetwise comedy from Tucker. In that way, when they are together, we can enjoy them instead of pining for what we expect from them as solo performers.

The film is written and directed as if it were a cheap knockoff of Beverly Hills Cop and Lethal Weapon. Without Chan and Tucker, Rush Hour would have been little better than a direct-to-video action movie, but with them, it is a highly entertaining action/comedy.