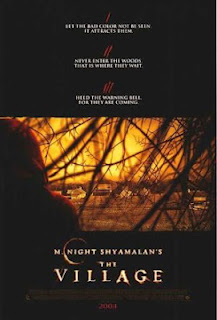 DRAMA/FANTASY/THRILLER with elements of horror

The subject of this movie review is The Village, a 2004 fantasy thriller and mystery film from writer-director, M. Night Shyamalan. The film is set in a late 19th century village built in a forest supposedly filled with dangerous creatures.

Circa 1897, Covington, Pennsylvania is a nice, quiet town surrounded by a beautiful, but haunting forest where strange, apparently dangerous, and unseen creatures live. For ages, there has been a truce between the citizens of Covington and the mysterious denizens of the woods. The people of Covington do not go into the woods, and the creatures (or monsters) do not come into the village.

But when quiet, almost sullen, young townsmen Lucius Hunt (Joaquin Phoenix) crosses the border from the town into the woods, the truce is broken, and the monsters start visiting the town. Soon, the villagers find an increasing number of their livestock slaughtered and skinned. In the midst of the fear, happiness blooms, but before long the scourge of the faraway towns comes to the village. Village elder Edward Walker’s (William Hurt) blind daughter, Ivy (Bryce Dallas Howard) must pass through the woods to find aid. But will the monsters dine on her beautiful flesh?

M. Night Shyamalan’s The Village is probably the least accomplished of his films since his worldwide blockbuster, The Sixth Sense. However, like his best-known films, the journey of watching the film is usually more important than the destination, which is the flick’s finale. Like Signs, the supernatural element is a red herring, and the most important element of The Village is its theme of dealing with heart-rending loss. The film also tackles the ideas of locking oneself off from the world to avoid devastating pain and of living in paranoid fear of the other, which is quite relevant in an America where “gated communities” seem to spring up everywhere on a daily basis.

As a work of movie art, The Village is an ambitious stumble. The ideas are good, but muddled, lost, and poorly considered, or at least poorly presented in the structure of this story. As big studio entertainment, The Village has a small numbers of genuinely frightening bumps in the dark, but the suspense is tepid and the thrills are exhausted half way through the film. The movie also takes such an idealized view of utopias, that it sometimes seems to take wild flights of fancy. However, Shyamalan just might be making a sly comment about the upper middle class and upper class’ fear of violence at the hand of the lower classes.

The delight in this film is the debut of Academy Award winning director Ron Howard’s daughter, Bryce Dallas Howard. Her performance is luminous, so much so that it lights the way for this occasionally befuddled mess. Ms. Howard is spunky and rebellious when she needs to be, and the sheer terror she displays is practically the only thing that sells this film’s horror thriller aspects. She also portrays moments of bravery with openness in her performance that invites us into her life; she is the one through whom we live vicariously. She is The Village’s champion.