Review: Rooney Mara is All Woman in "The Girl with the Dragon Tattoo" 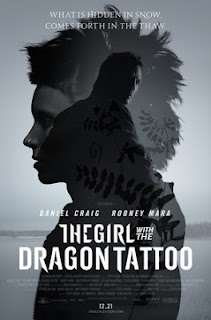 The subject of this movie review is The Girl with the Dragon Tattoo, a 2011 American thriller and murder mystery from director David Fincher. The film is based upon the late author Stieg Larsson's 2005 novel, Man som hatar kvinnor (translates to "Men who hate women"). The novel is best known by the title used for its English-language release, The Girl with the Dragon Tattoo, which was previously adapted into a 2009 Swedish film.

The film opens with Mikael Blomkvist (Daniel Craig), the co-owner of Millennium magazine, losing a libel case. He doesn't know that a brilliant, but troubled computer hacker and researcher named Lisbeth Salander (Rooney Mara) has just compiled an extensive background check on him for Swedish business magnate Henrik Vanger (Christopher Plummer). Vanger wants Blomkvist to solve the apparent murder of his niece, Harriet Vanger, 40 years ago. There is a common thread that eventually brings Mikael and Lisbeth together, when she becomes his assistant. Are their talents enough to solve what seems to be a series of murders of young women over a 20-year period, including the time when Harriet disappeared?

The American film's casting is inferior. Daniel Craig is too rough and craggy-looking to play the introspective Mikael Blomkvist, and Christopher Plummer, fine actor that he is, seems out of place as Henrik Vanger. That the overrated, anorexic-like Ellen Page was once considered as the choice to play Lisbeth Salander makes me realize that I'm luck the filmmakers got one bit of casting dead right. That is casting Rooney Mara as Lisbeth.

The premise of The Girl with the Dragon Tattoo is simply great. The subplots are also exciting and appealing, and the words to describe how good the characters are fail me. Give David Fincher this kind of material and he'll give us an exceptional movie, which he does in spite of my complaints. Still, everything turns on Lisbeth Salander.

That is why I give a lot of the credit for this movie's quality to Rooney Mara's performance as Lisbeth. Following Noomi Rapace's mesmerizing turn in the Swedish version is not a job for the squeamish or the overrated. Mara's Lisbeth has a spry sense of humor and sparkling wit. She is both feral and vulnerable, and she seems chaste while also being capable of being quite the seductress. Her intelligence and willingness to get physical with opponents makes Lisbeth often seem like a superhero.

Fincher makes Mara the focus of the story, and sometimes his attention to details about Lisbeth seems lurid. However, the script has holes and some of the other actors aren't up to snuff, so Fincher rightly builds the success of this film on Rooney Mara1s solid foundation. In Mara, the American version of The Girl with the Dragon Tattoo has a dragon of an actress, indeed.

Posted by Leroy Douresseaux at 2:38 PM