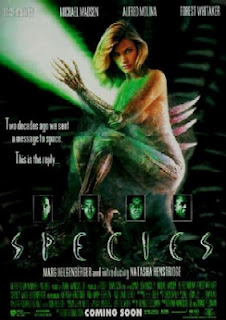 DRAMA/SCI-FI/THRILLER with elements of action and horror

The subject of this movie review is Species, a 1995 science fiction and horror film from director Roger Donaldson. The film follows a group of scientists who are trying to track down an alien killer that looks like a human female. The alien’s creature form (which is a bipedal being with tentacles on her shoulders and back) was created by Swiss artist, H.R. Giger, who also created the creature in the original, 1979 Alien film.

In 1979, the scientist at S.E.T.I., (the giant radio telescope that searches outer space for signals from intelligent extraterrestrial life) sends out a message that includes a map of human DNA. They get the message back with instructions on how to modify DNA. Human scientists use that information to create a genetically modified human child named Sil (Michelle Williams). Sil later escapes when the scientists decide to abort the project by killing her, and due to her incredible rate of growth, she morphs into a sexy, adult blonde bombshell. The head scientist, Xavier Finch (Ben Kingsley), leads a team of experts in their respective fields that tracks Sil to Los Angeles as she seeks a human male with whom she will mate.

When this film was first released, the film’s production company tried to sell Species as some kind of creature flick featuring a sexy monster who could arouse a man as easily as she could kill him. Species is actually a very entertaining movie that is as much a dramatic thriller as it is a sci-fi horror flick. The eroticism is mostly non-existent, other than the fact that the actress playing the “creature,” Natasha Henstridge is a very beautiful woman with the an athletic build and the kind of long legs that turn men on like a light switch.

The cast is made up of a group of fine character actors, including a personal favorite, the incomparable Ben Kingsley (Ghandi), who makes any role he plays something special. Although Marg Helgenberger seems slightly out of place with all these male players, she holds her own with the always-delightful Michael Madsen, the oddly charming Forest Whitaker, and the chameleonic Alfred Molina.

Director Roger Donaldson (Cocktail) does a fine job assembling his cast and getting them to make a passable sci-fi concept into a really good thriller that maintains its quality even through some bad CGI at the end.

Posted by Leroy Douresseaux at 8:51 AM