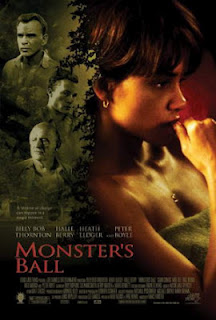 The subject of this movie review is Monster’s Ball, a 2001 romantic drama from director Marc Forster. The film is best remembered for Halle Barry winning the Academy Award for Best Actress, the first black actress in a leading role to win the award.

Hank Grotowski (Billy Bob Thorton) is a racist prison guard who works on death row. As he followed his father Buck (Peter Boyle) into the profession, so has his own son Sonny (Heath Ledger, The Patriot) followed him as a prison guard. When Sonny botches the “last walk” of a condemned black man, Lawrence Musgrove (Sean “P. Diddy” Combs), Hank and Sonny fallout and a brutal physical confrontation with tragic consequences. Hank meets and falls in love with Lawrence’s widow Leticia (Halle Berry) who also loses her son Tyrell (Coronji Calhoun). Their relationship confuses and conflicts them as they awkwardly seek their way towards love for each other.

Monster’s Ball is one of those films that does not work as entertainment so much as it explores the storytelling possibilities of a visual medium. Directed by the little known Marc Forster, the film is tightly directed, every frame is of importance to the story. Forster’s visual panache recalls Steven Soderberg’s bold indie feature sex, lies and videotape, and Forster takes great care in steering away from formula storytelling.

The script by Milo Addica and Will Rokos occasionally plays fast and loose with credulity. The viewer really has to suspend disbelief during several scenes. What saves the story is the gritty realism that permeates the script. The writers trust the visual communication of the film, but don’t rely on glitz and glamour to prettify the story. The screenwriters understand that the director and the cast will contribute as well. The screenplay is blueprint and a drama as well.

The acting is superb. Too watch these fairly well known actors open themselves up to what must surely be alien lives and idea is breath taking. Nothing that Heath Ledger has done to date has been this good. His Sonny is both an angel and a martyr; his youthful and clean face is a glimmer of hope extinguished by the pain of his family’s sordid past. Peter Boyle has a long career of making great characters, and his portrayal, as Hank’s racist senile father is another creation well played.

The star crossed and cursed lovers of the film played by Thorton and Ms. Berry are mesmerizing. Thorton has tackled unusual and compelling characters in his career. Ms. Berry has let her guard down and plays a character worlds apart from the high profile, glossy, sex objects she usually plays. To open herself to play a character that would be ridiculed, reviled, and pitied in the real world, who is akin to a pariah, is an act worthy of praise. Ms. Berry bares herself before the camera to be a plain and common woman beset by sorrows. Leticia’s simple needs, wants, and desires are foreign to many viewers and actresses. It’s good to see a cutie pie actress tackle serious and challenging drama.

To watch Thorton and Ms. Berry on the screen is a gift. When the mind calls for something other than a simple pastime, this movie fits the bill. A more unusual and hypnotic screen pair than Thorton and Ms. Berry is rare. They give bravura performances. Monster’s Ball may not be entertainment per se, but it is still a fine cinematic experience.