"A Separation" is a Unique Family Drama 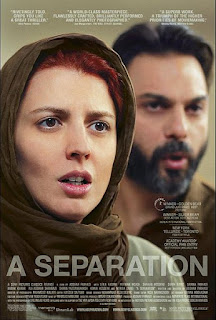 The subject of this movie review is A Separation, a 2011 Iranian drama from filmmaker, Asghar Farhadi. The film, originally titled Jodaeiye Nader az Simin, won the Academy Award for “Best Foreign Language Film” in 2012. A Separation focuses on an Iranian middleclass couple who separate and the resulting troubles from that separation.

As the film opens, Nader Lavasani (Peyman Moadi) and his wife, Simin (Leila Hatami), are seeking a divorce after 14 years of marriage. Simin wants to leave Iran in order to improve the life of their 11-year-old daughter, Termeh (Sarina Farhadi). Nader does not want to leave because he wants to care for his father (Ali-Asghar Shahbazi), who has Alzheimer's disease and whose situation is deteriorating. Now, Termeh must choose the parent with which she will live. When Nader hires a lower class woman to care for his father, it sets off a series of events that makes things worse.

A Separation is a potent family drama, and writer-director Asghar Farhadi manages to unveil a train wreck without resorting to the kind of hysterics some American films about divorce use. A Separation is so atypical of divorce films that it is less about feuding spouses and more about the dynamics of family life. Farhadi’s depiction of inter-family relationships is so blunt and honest that it sometimes seems alien and contrived. I frequently found myself saying that certain incidences in the film could not happen, but I think this was simply because I have devoured so many contrived Hollywood family dramas that anything that is different seems to be phony. Farhadi is simply honest about the lengths to which people will go to lie to members of their immediate family and other close relatives out of pride or because they are being stubborn.

Good performances abound, though I wish the film gave more focus to Leila Hatami as Nader’s wife, Simin. The story treats Simin as a supporting character, but she is just as important to A Separation as Nader, although her screen time suggests otherwise. Ms. Hatami, however, makes the most of her time and forces Simin to the forefront. A Separation is one of the year’s best modern (non-genre) dramas and people looking for something good, but different will find a gem in this.

Posted by Leroy Douresseaux at 7:03 AM