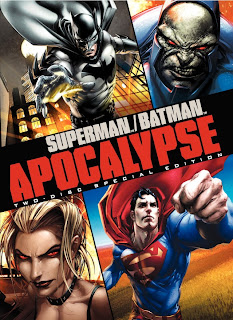 While investigating the wreckage of a spaceship that landed in Gotham City Harbor, Batman (Kevin Conroy) discovers that the ship had a passenger. It is a young woman who raises all sorts of havoc with her apparent super human powers, but Batman manages to subdue her. It is Superman (Tim Daly), however, who discovers that the young woman is Kara Zor-El (Summer Glau), his biological cousin, and like himself, a refuge from Krypton. Kara has little memory of her past, and her powers make her dangerous. Wonder Woman (Susan Eisenberg) steps in and takes Kara to her home, Themyscira, the island home of the Amazons.

They are not the only ones interested in Kara. On the planet, Apokolips, its lord, Darkseid (Andre Braugher), has learned of Kara and desires her to lead his honor guard, the Female Furies, so he kidnaps her. To rescue Kara, Superman, Batman, and Wonder Woman must recruit the former leader of the Furies, Big Barda (Julianne Grossman), but even her help may not be enough to overcome Darkseid, a god.

What I like about Superman/Batman: Apocalypse is that it gets everything right. First, the writing is strong. Screenwriter Tab Murphy efficiently presents the characters: their personalities, quirks, motivations, conflicts, and relationships. It all comes across as genuine – from Kara’s confusion and struggle to adjust to a new world to Superman’s almost desperate yearning to both protect Kara and to connect with someone from the world of his birth. Also, the action of the story is gripping, from the first moments to the tear-the-roof-off-the-mutha, battle royale featuring Superman, Kara, and Darkseid.

The animation is also good, not as good as feature film animation, but the characters look good during the action and fight scenes, which is what counts in these direct-to-DVD movies based upon superhero comic books. The animation’s design style is based on the art of the artist who drew “The Supergirl from Krypton, the late Michael Turner. This movie’s designers and animators capture Turner’s quirky style and his graceful approach to drawing women. Kara’s hairdo certainly reflects Turner’s sensibilities.

All in all, Superman/Batman: Apocalypse is one of the better DC Universe Animated movies, and is one I’d watch again.