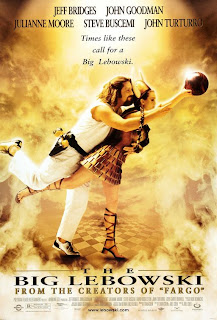 For their seventh film together, the Coen Brothers (co-writer/producer Ethan and co-writer/director Joel) tackle the screwball comedy in The Big Lebowski. Coming off their Oscar win for writing the brilliant Fargo, it was a daring project that could have turned off the audiences that were coming as a result of seeing Fargo. I don’t think the Coen’s gave a damn. They have a vision of how to tell a story using film as their medium, and they build a movie around their vision.

In the film, Jeffrey Lebowski (Jeff Bridges), known by everyone as The Dude (in fact, that is the name he prefers), receives a visit from a few thugs looking for money owed to their boss by the missus, Bunny (Tara Reid). Truth is they have the wrong Lebowski; there is another Jeffrey Lebowski (David Huddleston), a millionaire, and Bunny is his trophy wife. One of the intruders takes a whiz on The Dude’s rug, so naturally The Dude seeks recompense from Bunny’s hubby, the other Lebowski. This case of mistaken identity ensnares to The Dude in a web of abduction and competing interests with The Dude and his temperamental homeboy, Walter Sobchak (John Goodman), right in the middle.

The Coen’s are without a doubt two of the premiere creators of surreal films. They embrace classic Hollywood style with a post modern skewed view. The Big Lebowski is part Woody Allen and part David Lynch in the brothers’ approach to character and story. The abduction of Bunny uncoils into a delightful mixture of wacky comedy and film noir whodunit. As in all their films, there is always a sense of dread, however small, and as usual Joel can weave a thriller out of the most benign and ordinary events. It’s as if what seems really obvious and ordinary is also the unknown, and the unknown is so far “out there” and potentially dangerous.

Perhaps the thing that really makes a Coen film is the cast. Without good character actors, the brothers couldn’t sell us their strange brews. Amidst a stellar cast of players, Jeff Bridges and John Goodman, especially Bridges, carry this film. They have great chemistry together, and Bridges, one of the finest actors of the last two decades can carry two films at once on the broad back of his immense talent. This movie is almost totally from his point of view, and we have to buy into his character. If we don’t believe that he is who he says he is and that he believes what he believes, The Big Lebowski would be just a failed mainstream pic playing at being indie cool. The Big Lebowski is bravura work from two great American filmmakers, and they once again show their savvy by picking just the right guy to make this movie really soar.

Posted by Leroy Douresseaux at 8:05 PM