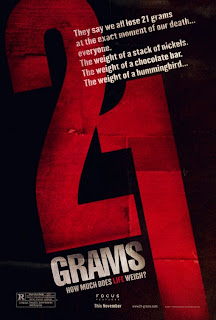 In the heavy drama, 21 Grams, the lives of a former drug addict, Cristina Peck (Naomi Watts), a terminally ill mathematics professor, Paul Rivers (Sean Penn), and a spiritual ex-convict, Jack Jordan (Benicio Del Toro), intersect tragically and hopefully after a car accident. Jordan kills Cristina’s husband Michael (Danny Hutson) and her two daughters in a hit and run accident. After receiving Michael’s heart in a transplant operation, Rivers seeks and woos Cristina at the cost of his already deteriorating marriage.

The film by rising directorial star Alejandro González Iñárritu and screenwriter Guillermo Arriaga (the duo who collaborated on Academy Award nominee Amores Perros) is wrought with unpleasant circumstances in the lives of the characters. That’s not bad, but too much heartache and tragedy can become tragicomic. Verisimilitude becomes stark reality, and the drama is spoiled by harsh realism. The audience prefers the staged reality of drama to heavily dramatized reality. Iñárritu and Arriaga deliver the pain and suffering with the precision of sledgehammer blows, and it all becomes too much and can disengage the viewer from the characters.

21 Grams is worth a look for people who love to see exceptional acting, especially the kind delivered by the leads, but the supporting players also do some standout work.