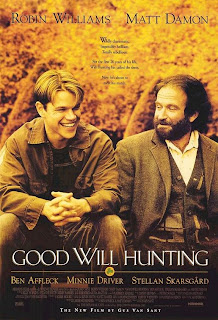 Will Hunting (Matt Damon), a charismatic, brilliant young man has spent, or rather wasted, the first 20 years of his life when an MIT math professor discovers Will’s mathematical gifts. When Will is arrested after a street fight, Professor Lambeau (Stellan Skarsgard, Breaking the Waves) takes custody of Will determined to nurture Will’s rare genius so that it is not wasted.

Will runs through a gamut of psychiatrists as part of his court ordered treatment until he meets a grieving, career impaired shrink named Sean Maguire (Robin Williams). Maguire is from Will’s old neighborhood, and he recognizes some of the young man’s difficulties with a society so different from their ‘hood. He tries to reach the young man as Will continually enforces a wall around himself, a wall he has had since childhood to protect himself from a world seemingly always out to hurt him.

Will also meets and falls in love with Skylar (Minnie Driver, Grosse Point Blank), a pretty, young pre-med student, who eventually demands a commitment of love that Will is reluctant to give. If he embraces a new life, Will may have to abandon the impoverished, but familiar life he knows, including his childhood friend, Chuckie (Ben Affleck).

Good Will Hunting is a beautiful, moving story that pulls not too gently on the heartstrings. Affleck and Damon won the Oscar for Best Original Screenplay of 1997 for the film’s script. They crafted simple, yet evocative characters for both themselves and the rest of the cast. Hunting is the most complex of the lot, but he isn’t difficult to understand. He’s been hurt, so he lashes out at the world. He’s made a safe little hovel in which he can live, and he doesn’t intend to venture far from it. He knows it and he feels safe in it, only occasionally peeking his head out of his hole to delight people with his brilliance and wit.

Williams’s portrayal of Sean Maguire earned him a long overdue Oscar for Best Actor in a Supporting Role. Like his Dr. Malcolm Sayer in Awakenings and Parry in the Fisher King, Maguire is a man in pain. You can feel a great building up in the shell, that these men have created for themselves, ready to break out and violently splash the world. In the end, they learn to gradually release their pent up pain and emotion and to reach a sense of balance. The parts that Williams usually take are usually so flamboyant and loud, begging for attention, like Williams himself. When he takes a part like Maguire, he has to control himself, and we can feel, along with him, the struggle to remain in his containment unit. To see him so controlled may have attracted Academy voters to his cause.

Good Will Hunting isn’t a smart movie. Damon and Affleck are occasionally stiff and forced in their parts, and there is still a rough edge to their acting abilities, especially Affleck’s. Driver is good, but the script only allows hints at her personality. Skylar’s one outburst about her troubled past piques the interest, but is gone as suddenly as it came.

Gus Van Zant does a credible job here, but one mostly gets the sense that he was just following a sort of paint by numbers plan. This is more about Damon, Affleck, and Williams than the director. But Van Zant assists them in bringing some tears forward; it’s a empathic, feel sad movie with a tacked on feel good ending. But done well, it’s worth repeated viewings.