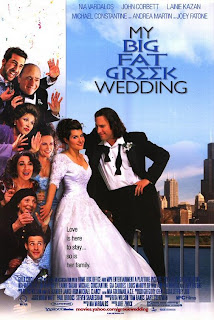 Toula Portokalos (Nia Vardalos) is a 30-year woman of Greek ancestry (Greek-American?); single with no prospects for marriage, she considers herself a failure, and maybe her family is only a little less hard on her. All her cousins married good Greek boys and are making lots of Greek babies.

One day, she is serving coffee in her father, Gus Portokalos’s, restaurant, Dancing Zorba’s, when she sees and is attracted to the ultimate unavailable guy, Ian Miller (John Corbett; remember him from Northern Exposure, the DJ?), but she is afraid to engage him. Later, Toula resolves to change her life. She enters college, gives herself a makeover, and drops her coke-bottle glasses for contact lenses. Eventually, Ian reenters her life and they engage to marry, but her family, in particularly her father, is not big on the idea of her marrying a non-Greek. However, when the wedding is a go and everyone has more or less accepted it, Toula is headed for a big fat Greek wedding.

My Big Fat Greek Wedding was a shocker hit starting in Spring 2002 all the way through the summer. Every weekend, its box office take was nothing spectacular, but it was large and steady. The film also reportedly appealed to older people who rarely go to the movies, and just from my experience, “those people” really liked the film. It is currently the highest-grossing film never to have hit number one at the box office.

The film is seen as a story of clashing cultures, but it’s really about Toula’s clash with her ethnic background and culture and her generational differences with her father, Gus. There is a real edge to the tension between Toula and Gus, although neither actor gives a standout performance; they are, however, good enough to make this motor go. Some of the cultural clashes and aspects of Greek or Greco-American culture on display are utterly hilarious. Some of it is not funny, and some of it is simply overkill. The script is clunky that way, and it badly short shrifts Ian’s parents, Harriet and Rodney Miller (ably played by Fiona Reid and Bruce Gray); more of them would have added balance and sharpness to the scenes in the film that deal with Anglo and Greek clashes.

Vardalos earned an Oscar nomination for her screenplay, a bit of overkill, but what Vardalos and the director get right is atmosphere and realness. There’s a truth to My Big Fat Greek Wedding that crosses ethnic and so-called racial lines, making it a universal fairy tale that anyone with a big family and nosey relatives will enjoy. You might even find yourself shaking your head in agreement.