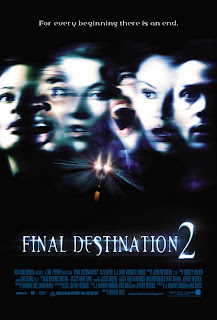 When we left the movie Final Destination a few years ago, seven people had miraculously been thrown off a plane that would explode within minutes of takeoff – the Explosion of Flight 180. Unfortunately, those passengers were meant to die on that plane, so Death stalked them and knocked them off one by one in a series of bizarre accidents. By the end of the film, only two of the miracle seven survived.

Final Destination 2 and enter another set of fresh face teens leaving for fun in the sun when one of them has a premonition of a fantastic and horrific traffic accident that takes many lives – the Pile-up on Route 23. Kimberly Corman (A.J. Cook) manages to save some of those lives, but she, like her male predecessor from the first film, has fooled with Death’s intricate design, and he comes stumping for her and the rest of the supposed-to-be-dead crew.

Final Destination 2 is simply a fabulously entertaining film. At once trashy and cheesy, it is also very well composed and a sheer joy to watch. During the first ten minutes or so, I had mixed feeling. The film didn’t seem like it would amount to much; then, it just exploded with unbridled mayhem and becomes this delirious display of gruesome accidents. In fact, the sequel is far bloodier and gorier than the original, but it has a peculiar sense of humor like that of a leering ax-wielding murderer. The filmmakers don’t seem to take the film seriously, but they were certainly quite serious in the making of it.

Director David R. Ellis was a long time stunt coordinator and second unit director, so that meant he handled many action sequences, and it shows here. The movie’s opening car wreck easily rivals the execution and has the thrill of the famous train wreck in The Fugitive. I don’t know if Ellis is a diamond in the rough that no one in Hollywood noticed before the last few years, but he has the touch of top director. He builds a level of suspense and a sense of dread that’s nonstop, and he can surprise you when you didn’t think there was anything left in the film to discover.

For those who like or liked Scream, Final Destination 2 is in that vein, but more tongue in cheek, more gruesome, and more darkly comic. Its inspired wackiness makes for a film that is as good or better than the original. Horror movie sequels almost never surpass or even match their originals, in box office or quality; I don’t know about the former, but 2 soars in quality. In fact, it stands alone quite well; the sign of well thought out filmmaking. Think of the gore of 80’s slasher films, the non-stop mayhem of most action movies, and the cynicism of late 90’s horror and suspense thrillers and you have Final Destination 2.

Posted by Leroy Douresseaux at 11:05 AM